The Fed continued its campaign to raise interest rates, with a 75 basis point hike this week. One consequence of the monetary tightening has been big exchange rate moves, with currencies such as the pound hitting multi-year lows against the dollar.

In Focus - Joining The Rate Race 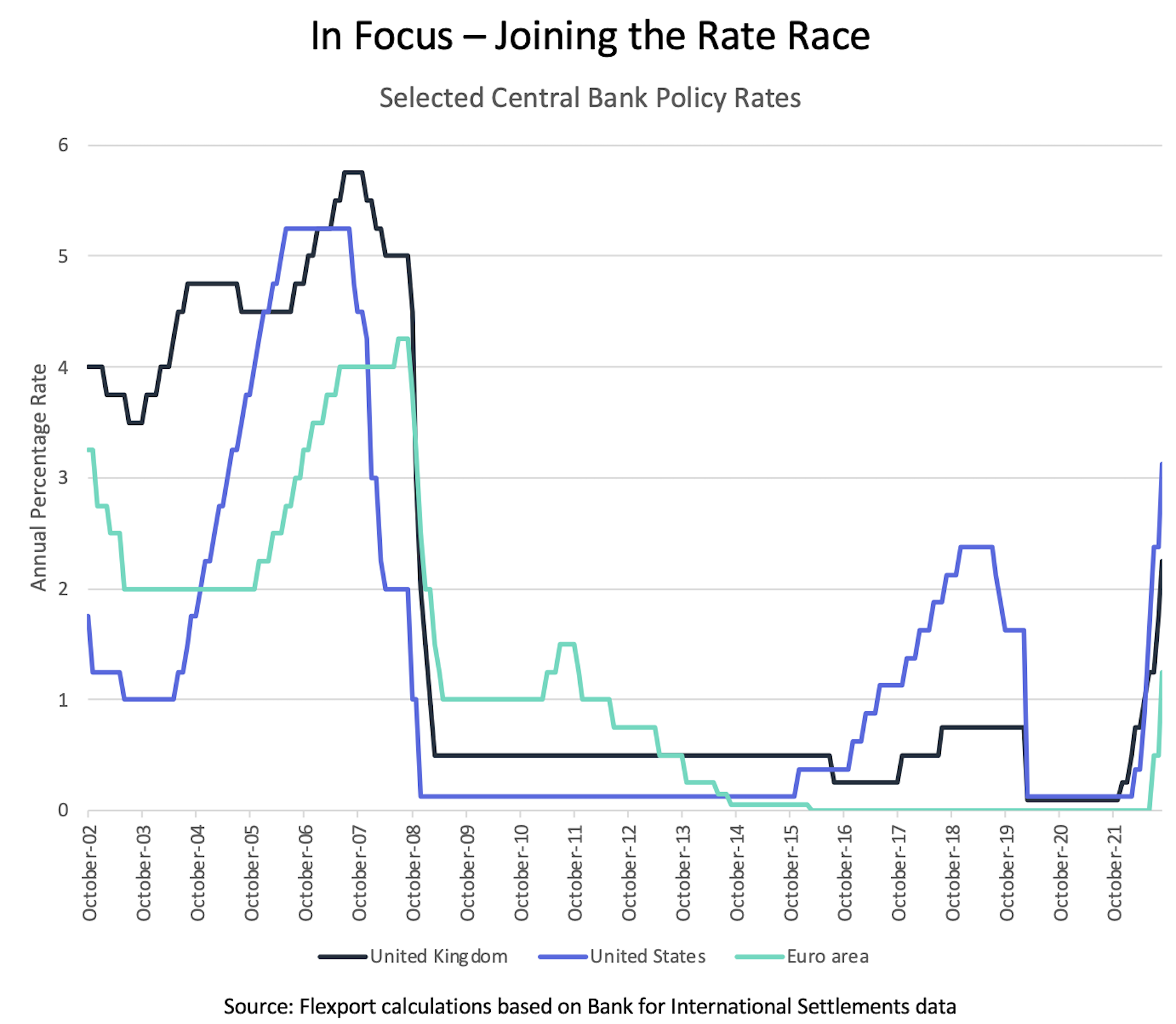 In times of old, central banks would raise policy interest rates when an economy appeared to be overheating and lower them when an economy needed a boost. That had largely fallen out of fashion in recent times, with rates constrained near zero. But the policy rate is now back.

The U.S. Federal Reserve this week set the target for the Fed Funds rate between 3% and 3.25% (the blue line in the chart). That’s the highest level since end-2007, in the windup to the global financial crisis. The 0.75 percentage point increase was the third large one in a row.

The rate hike was expected. Perhaps more newsworthy was the new set of economic projections the Fed released along with it. Each member of the policy-setting group indicates their forecast for key variables, including the Fed Funds rate. In June, the median projection was that the rate would climb to 3.4% in 2022 and 3.8% in 2023. Just three months later, the revised projections were 4.4% in 2022 and 4.6% in 2023. This has been a rapid tightening, but there’s more to come.

So how are these higher policy rates supposed to cool an overheating economy? Indirectly. While the Fed Funds rate directly affects certain very short-term borrowing, the changes tend to pass through to longer commercial interest rates that affect economic activity. As just one example, average mortgage rates this week hit 6.29%, the highest in 14 years. One year ago, the equivalent mortgage rates were 2.88%. Those higher rates make home-buying more expensive; when home buying slows, so do all the purchases and services that tend to come with it.

Big policy rate moves can also have dramatic effects on exchange rates and trade, particularly if other central banks are not moving at the same pace (see the chart). To oversimplify, an international investor sees higher interest rates as good and higher expected inflation as bad. If investors compare the British pound and the US dollar and see lower interest rates and higher expected inflation in the UK, as they did in the wake of a newly-announced tax cut, they are likely to move their money out of pounds and into dollars, driving the pound down relative to the dollar.

At the start of this year, one euro cost $1.14. As of Friday, that had fallen to 97¢, a euro depreciation of roughly 15%. The British pound fell from $1.35 at the start of the year to below $1.09 on Friday, a 19% drop. The percentage fall in the Japanese yen has been comparable. This dollar appreciation makes US exports look more expensive, thus further relieving pressures on US production. It makes goods from the US – or those priced in dollars, like oil – look more expensive abroad.

The pound this week fell to its lowest level since 1985, which happens to be the year of the last major concerted currency market intervention. Such unsettling swings can be part of old school central banking, too.

Recent Flexport research includes a deep dive report into the inventory strategies of apparel retailers. We find that an explosion in inventories has resulted from a mixture of: poor demand forecasting; strategies to mitigate inflation and; front-loading to avoid further logistics disruptions.

While there are reports of individual companies looking to release staff, the trend is not yet showing up in U.S. initial unemployment claims. The latest data show weekly claims at 213K, which is roughly where it was last Christmas. The seasonally-adjusted number has bounced around been between 166K and 261K since then, with the latest number right in the middle.

A benchmark oil price fell 7% last week. West Texas Intermediate crude traded near $79/barrel, its lowest close since January. Given the dollar’s rise, the recent price drop effects are seriously reduced for regions such as the Euro Area.

German producer prices rose by 45.7% in the year to August, the highest increase ever recorded. That was heavily driven by energy prices, which rose 139.0% from a year earlier.

Japan’s core inflation rate hit 2.8%, the highest rate in almost 8 years. While the number is low relative to the U.S. and Europe, Japan has struggled with deflation for decades and the number exceeds the Japanese central bank’s target. Nonetheless, the bank held its policy rate steady at -0.1%.

UK monetary and fiscal policy headed in opposite directions last week. The new government proposed an expansionary fiscal policy with significant tax cuts and spending increases. Meanwhile, the Bank of England moved toward a contractionary monetary policy with a policy rate hike from 1.75% to 2.25%.

The U.S. Trade Representative announced its negotiating goals for the Indo-Pacific Economic Framework (IPEF) as resilience, inclusion, and sustainability. The first of these referred to transparency measures and regulatory measures to ensure resilient supply chains.

In a speech at the United Nations, WTO Director General Okonjo-Iweala spoke of how trade empowers women economically. She said trade creates jobs and opportunities for women and the businesses they run and helps drive economy-wide growth.