Recent weeks have seen the dollar strengthen significantly against major currencies. That’s a natural result of more aggressive monetary tightening by the U.S. Federal Reserve. But the effect is to make U.S. imports look cheaper while exports look more expensive. 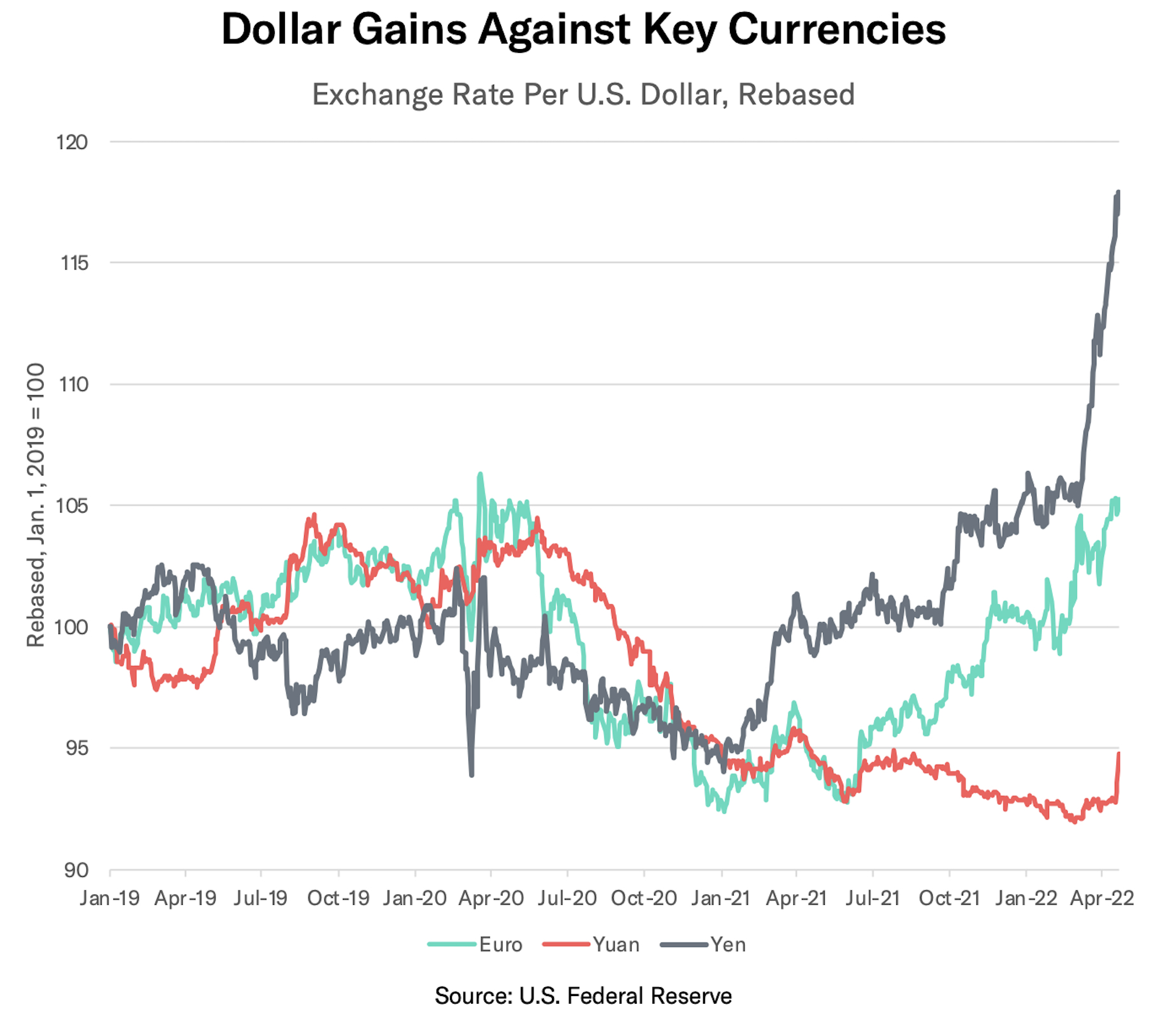 In recent months, there has been a marked divergence in policies between the central banks of the United States, Europe, China, and Japan. While the U.S. Federal Reserve has ended its purchasing of longer-term bonds and embarked on a series of rate hikes – expected to accelerate at a meeting this week – counterpart banks have either held off on tightening or have loosened their monetary policies.

Within a country or a monetary union (like the Euro Area), monetary tightening generally brings an increase in interest rates. This is true for policy rates like the short-term Fed Funds rate, of course, but also for rates that the central bank does not manipulate directly, like the 10-year Treasury bond rate or mortgage rates. That’s within a country; what about between countries?

An exchange rate is the price of one currency in terms of another. For currency markets, oversimplifying a little, supply and demand come from two distinct markets. There is the market for goods – seeking euros to buy German goods, or dollars to buy American goods – and the market for financial transactions – seeking euros to buy German government bonds or dollars to buy Treasuries. In the short run, financial market transactions tend to overwhelm goods market transactions (also sometimes known as “current account” transactions).

If we hold everything else equal and the Fed tightens monetary policy, therefore, we’d expect to see U.S. interest rates rise – they have – and we’d expect to see the demand to own these higher-yielding bonds go up. The higher demand for dollars relative to other major currencies should push up the value of the dollar. In other words, one will have to pay more euros or yen or yuan to get a dollar – a dollar appreciation.

That’s exactly what we see in the graph. It charts currency developments from the start of 2019. It is arranged so that higher numbers represent a stronger dollar and each exchange rate is scaled so that January 1, 2019 = 100.

At the onset of the pandemic, the dollar initially strengthened against these currencies, then weakened until the start of 2021. At that point, the dollar started strengthening against the euro and the yen, while still weakening against the yuan. While these major currencies provide important examples, a broader dollar index that also takes relative inflation into account tells a similar story, hitting its recent minimum in January 2021.

Even if the catalyst for these moves lies in the financial sector, the resulting dollar appreciation has important implications for goods trade. As the dollar strengthens, imported goods look steadily cheaper and U.S. exports look more expensive to buyers abroad. The net effect is to lessen the overheating of the U.S. economy, both by potentially cutting the demand for U.S. exports and cutting the price of imports. So, a feature, not a bug. But sudden exchange rate shifts of the sort we’ve seen recently can still be unsettling for those engaged in international trade.

In a surprise, 2022 Q1 GDP fell 1.4%, according to a preliminary estimate. The key contributors to the decline were a slackening in inventory buildup, reduced demand for domestically-produced products, and a fall-off in U.S. exports, with goods exports down 9.6% at a seasonally-adjusted annual rate. Two key drivers of U.S. growth continued to appear strong, however, with personal consumption growing at a 2.7% annual rate and investment growing at a 2.3% annual rate.

In newly-released March data, real disposable income fell 0.4% and real personal consumption expenditures (PCE) increased 0.2%. That was possible because the personal savings rate fell to 6.2%, its lowest rate since the end of 2013. The consumption figure reflected the second straight month in which real goods consumption fell and real services consumption increased.

The PCE data included new estimates of inflation. The overall 12-month rate increased to 6.6%. Subtracting out food and energy gave a 5.2% rate, while the Fed’s preferred “trimmed mean” rate rose to 3.7%. Broken down by type of consumption, goods prices rose at a 10.6% rate while services rose at a 4.5% rate.

Euro Area economic growth continued to slow, though it did not contract like the United States. GDP growth was 0.2% in Q1 of 2022, down from 0.3% in the previous quarter. April Inflation, meanwhile, increased to 7.5%. That inflation figure was heavily influenced by energy, which was up 38.0%. Excluding food and energy, Euro Area inflation was 3.9% in April.

U.S. merchandise trade activity increased by 9.9% in March versus February, including an 11.5% rise in imports. All the segments tracked by the U.S. Census Bureau increased, though the gain was led by a 15.0% expansion in industrial supplies which is likely linked to higher commodity prices. Total imports were also 25.6% higher than the same period last year.

The European Union is taking steps to cut all tariffs on imports from Ukraine, following a similar move recently made by the U.K. Exports of metals may be a particular beneficiary while the assistance for agricultural products may be limited by the practicality of exports and harvest risks.

The EU and India have agreed the need for “in-depth strategic engagement” and will launch a Trade and Technology Council. In common with recent action by the U.K. that will likely represent isolated, transactional deals on investment rather than a full-throated trade deal.

Talks between the U.K. and U.S. this week focused on security of supplies, e.g. “practical support for small and medium sized enterprises” rather than a wide-ranging trade deal. That’s not a surprise given the Biden administration’s prior comments and absence of TPA, or “fast track” deal approval from Congress.

The U.K. has formally delayed full import checks on EU products from July 1 until at least the end of 2023. That marks the fourth delay in the post-Brexit digital trade systems.

There are emerging signs that the Biden administration may cut some Section 301 duties on imports from China, with the White House stating “we’re certainly looking at where we see costs being raised at a time where we’re seeing heightened inflation”. The U.S. Trade Representative remains the arbiter of where tariffs go next.

Russia has cut off natural gas supplies to Poland and Bulgaria after the countries refused to accept Russia’s demand for payment in rubles. The contracts are denominated in dollars but Russia’s Gazprom is trying to manage financial sanctions against its key financial partners. The move may force the EU to consider whether to enact a wider embargo against Russian gas.

Indonesia has banned the export of certain palm oil in order to manage higher domestic food costs after the loss of Ukrainian sunflower oil production led to a rise in global prices of alternative cooking oils. That follows a reduction in the availability of supplies from Malaysia due to U.S. rules on alleged forced labor activity.

The major automakers are restructuring their Europe-to-China supply chains of completed vehicles after shipments by train became impossible due to sanctions against Russian railways. Reverse flows (China to Europe) had already been restricted early in the conflict.

While the Chinese government has yet to apply sanctions against Russia there are reports that at least one Chinese technology firm has ended sales to Russian buyers. Corporations based outside of sanction-applying countries may be keen to avoid triggering the application of secondary sanctions. 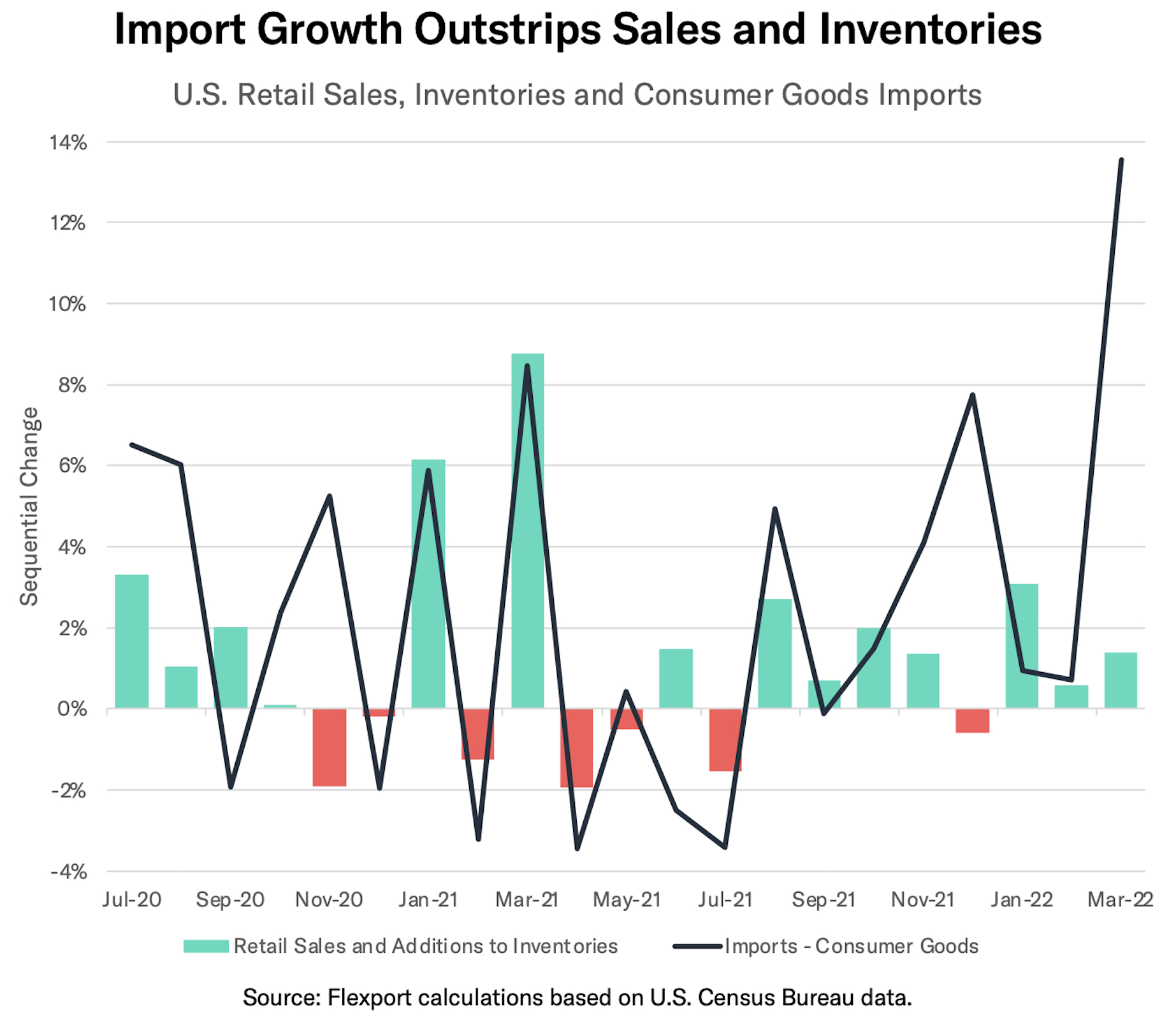 U.S. consumer goods imports reached a record $83.0 billion in March after rising by 13.6% sequentially and by 25.8% versus a year earlier according to data released this week. Are consumer goods retailers importing too much though?

Retail sales, excluding autos, food and fuel, only increased by 7.6% year over year in March, suggesting the risk of overshoot. The retail inventory-to-sales ratio is also increasing and reached 1.13x in March compared to 1.07x on average in 2021. There’s further to go on inventories though given the ratio average 1.25x in the pre-pandemic period.

As shown in the chart above the change in retail sales plus additions to inventories increased by 1.4% sequentially in March versus imports’ 13.6% growth. Indeed, import growth in percentage terms has outstripped sales-plus-inventories in four of the past five months.

It may be too early to call an overshoot though. The dollar value of imports of consumer goods were only equivalent to 15% of consumer retail sales and inventory built in the past 12 months with domestic production and retail markups making the difference.