Is the shortest path the fastest? Trends in Ocean shipping show that may not always be the case. This report reviews data comparing shipping and turnaround times between East and Gulf Coast versus West Coast ports. East and Gulf Coast ports, while more numerous and smaller than their Pacific peers, are capturing more and more of U.S. imports after a brief pandemic reversal.

As businesses turned to suppliers in Asia to satisfy American markets over the past decades, West Coast ports have become an important gateway for goods passing through to eastward destinations, as well as serving large home markets. The ports of Los Angeles and Long Beach alone represented 34.8% of total U.S. bound seaborne imports in 2021 and have been a nexus for import congestion.

As congestion persists in 2022, there are additional worries for importers into the U.S. West Coast. Labor disputes, especially around automation, have slowed output of Pacific ports in the past, and a recent strike action in Korea shows how impactful labor disputes can be. 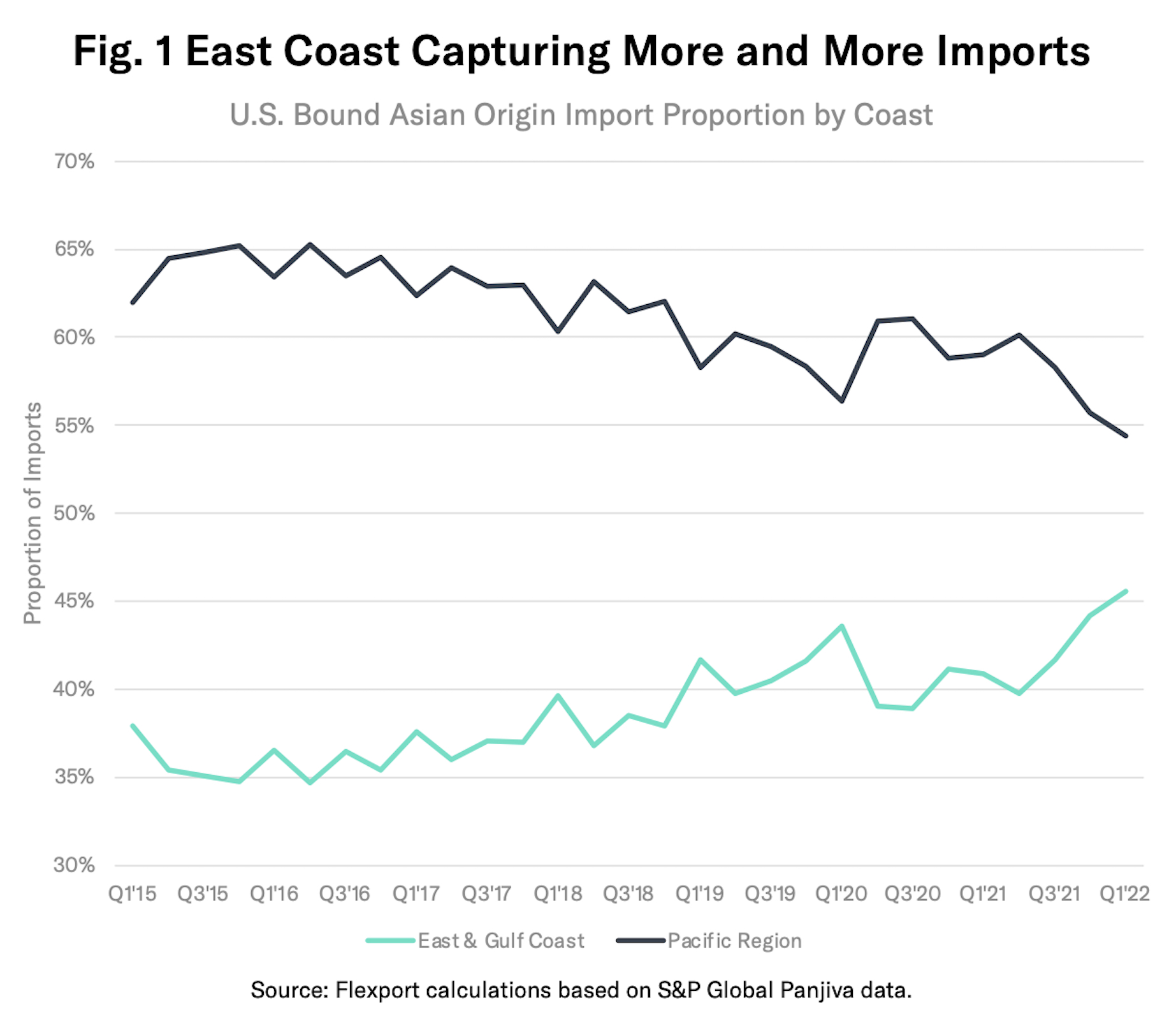 At face value, this makes little sense; traveling from Asia to the East Coast at least requires transiting the Panama Canal, adding time and distance to a trip that could have terminated in Los Angeles or Oakland. What is causing this shift?

In the long term, the shift can likely be explained in part by infrastructure. One example is the widening of the Panama Canal in 2016 which allowed larger vessels to transit the waterway. There has also been an ongoing expansion of container facilities on the East Coast including improved access such as port dredging and bridge raising. These changes increased the ability of eastern ports to handle more cargo despite the higher transit times. 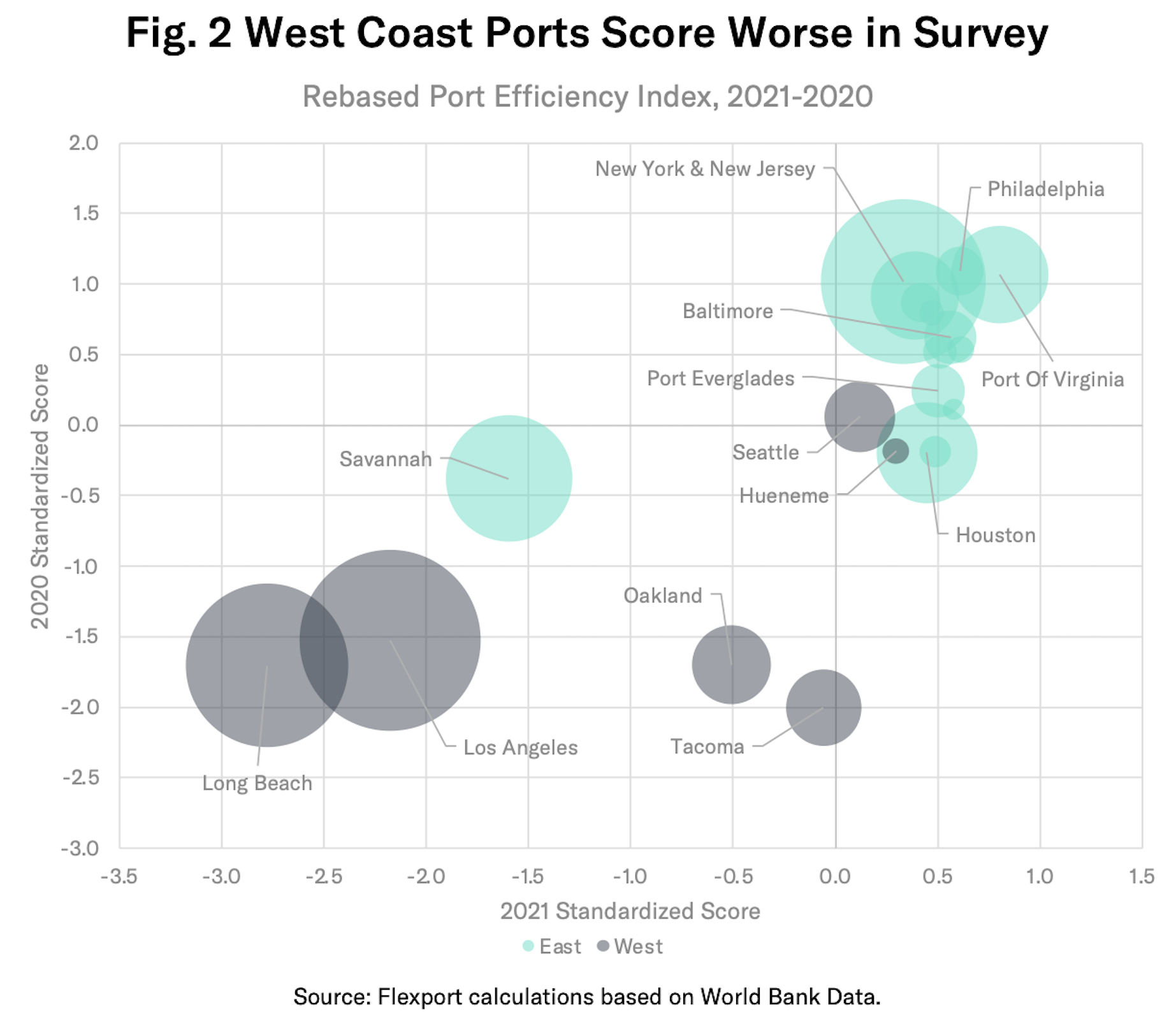 Some of this efficiency gap may be due to the types of ships the ports handle, as the largest container vessels almost exclusively call on Pacific destinations due to the restraints of the Panama Canal. The report found that “An average of around 60 percent of total port time is consumed by container-handling operations,” which aligns with the difficulties ports faced with container storage and backlogs. Another finding saw that larger ships (over 13,500 TEU) saw fewer crane moves per hour than the next smallest bucket (8,501-13500 TEU), 23.8 to 24.2. This may thus be a contributing factor to the lower scores of West Coast ports.

There are likely more differences in port efficiency including: higher competition between closely-packed ports on the East Coast; inland transport service efficiency, i.e. the ability to move goods away from the port effectively; varied operational models; as well as equipment and driver availability.

This does not mean that West Coast ports will cease to be essential components of U.S. trade. In the future, if factors remain unchanged, there is likely to be an equilibrium point where the import mix can settle. Eastern ports capacity to absorb West Coast volumes is limited, and congestion would move east if too much volume shifted.

The size, number and distribution of Eastern ports also may work against the region in this case, as where on aggregate capacity may be present, it is composed of small openings at multiple ports that add unwanted complexity and cost to carrier operations.

Pacific ports still retain large capacities and advantageous locations for Asian trade, as well as extensive inland logistics networks that can be utilized by importers once volumes normalize.

When the pandemic hit there was a significant increase in spending on goods by consumers, which in dollar terms has yet to evaporate, as shown by Flexport’s Post-Covid Indicator and Trade Activity Forecast.

There are also two origin factors. First, manufacturing operations in Asia reopened faster than domestic and European producers. Second, the jump in demand for goods was driven by consumer goods, where sourcing from Asia dominates that from Europe. These favored traffic flows towards the West Coast, and while East Coast ports also saw increases in volumes, traffic followed the shortest route. 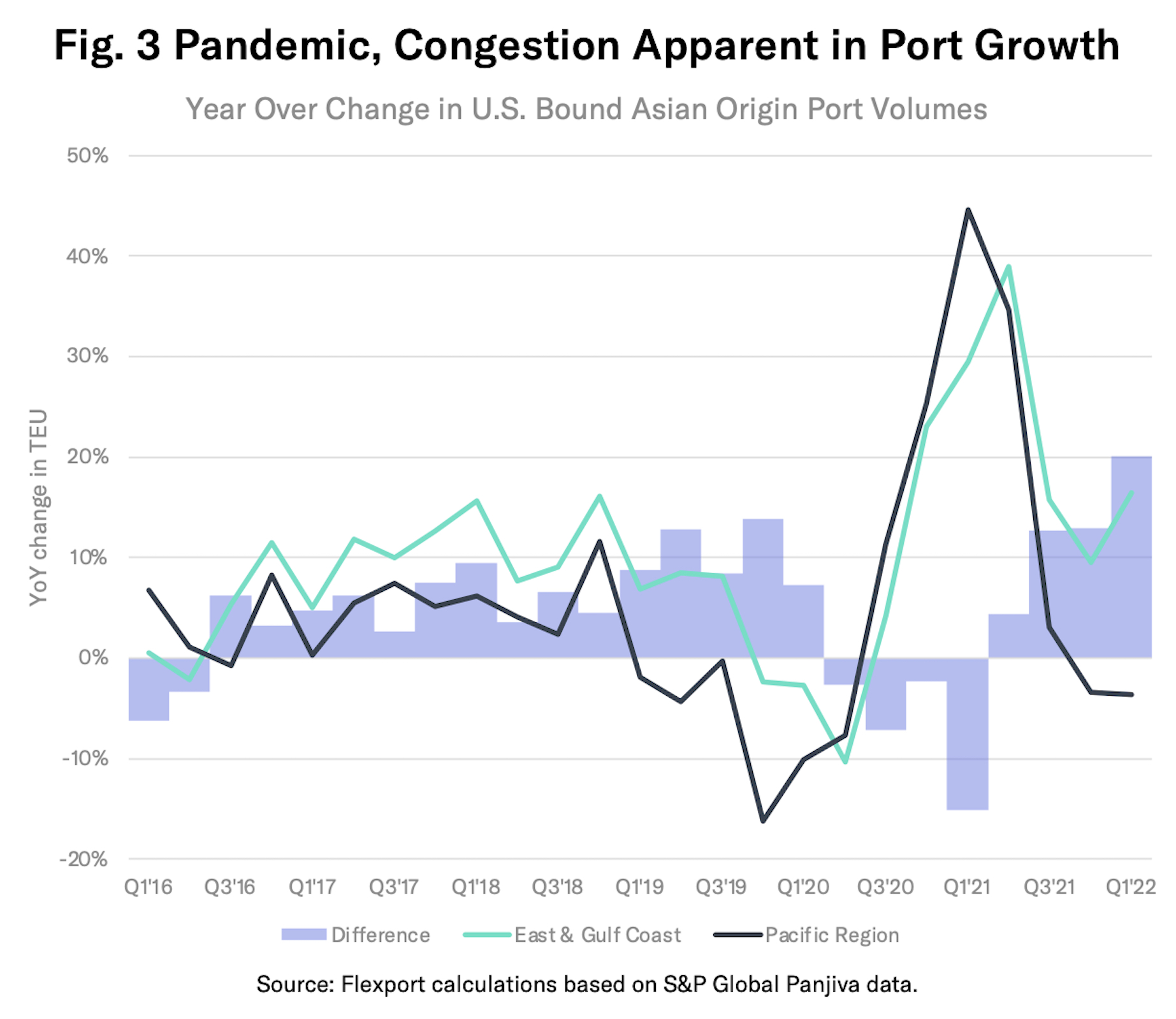 Where before it may have made sense to move most products through the West Coast before consolidating and shipping to East Coast markets, shipments headed for the East Coast may find a faster path by traveling farther on the water. Ports like Houston, New Orleans, and Mobile offer access to north-south interstates, while ports like Newark and New York offer both access to a direct market in the local area, and outbound logistics along the I-95 corridor. 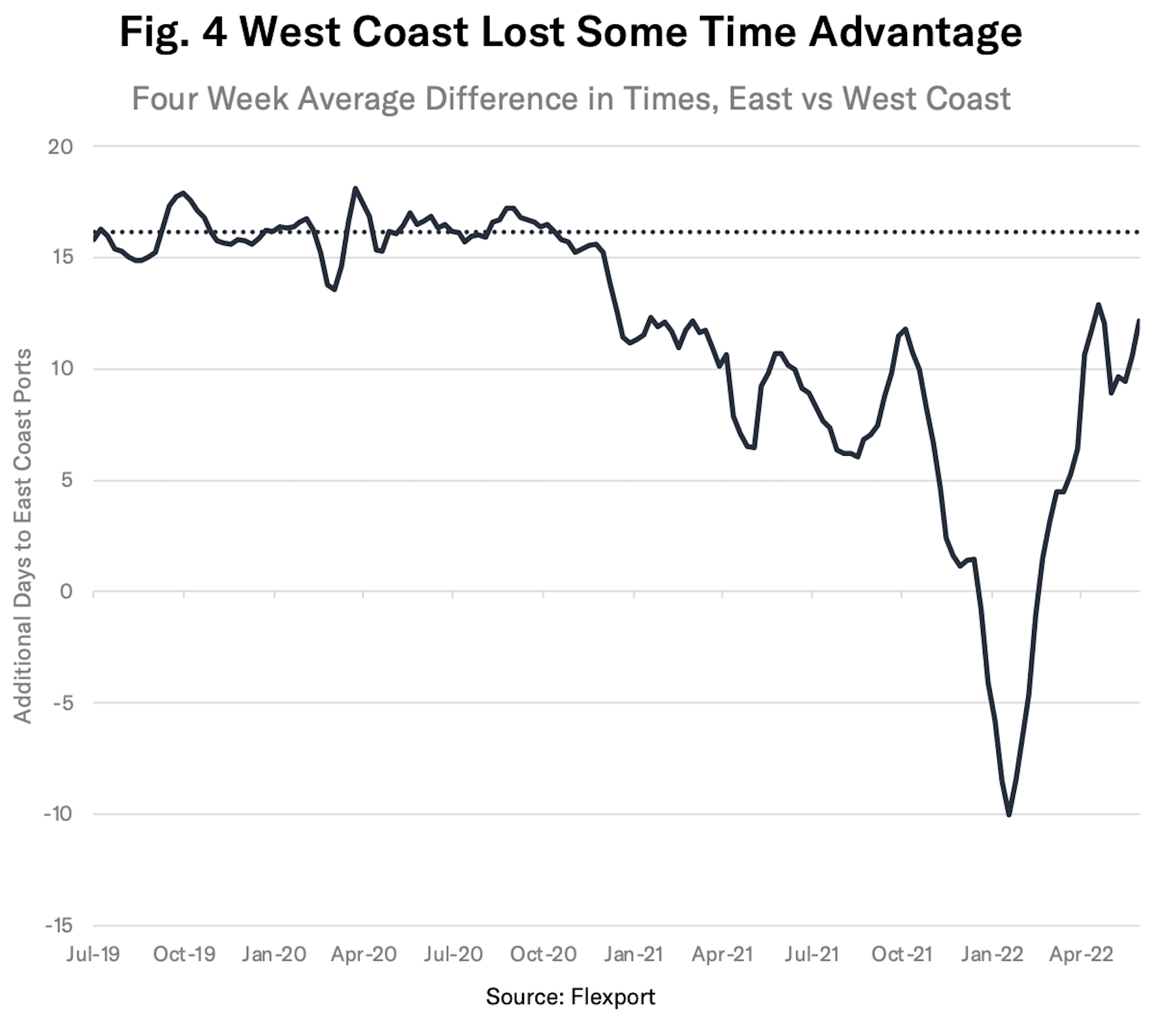 Assuming a shipment headed to an eastern market, this represents a loss of 47.8% of the timing advantage for West Coast ports in 2021. To compound this, the time differential turned negative for a short period in late 2021 and early 2022, which indicates that total time at sea and at the destination port was faster for East Coast ports. Since a vessel going to the East Coast still has to transit a greater distance, the difference in timing is likely a combination of vessel backlogs and congested terminals.

Conclusion: East coast ports have been gaining market share of both total and Asian imports compared to Pacific ports. This is a result of a variety of factors, both external to supply chains, like pandemics and trade wars, and internal to supply chains like congestion, infrastructure expansion, and efficiency. Data on imports and transit times during the pandemic shows a clear trend toward East Coast ports has developed as a response to congestion, with East Coast ports gaining competitiveness in terms of shipment timing. This advantage will likely cease if enough goods move East, but congestion in the meantime may cause supply chain disruptions for imports from Europe, Africa, and South America, which trend more towards manufacturing.