The cost of trucking has hit a record yet there are concerns in the industry about the future. What’s led to the higher prices? Why might they fall? Is this a leading indicator for logistics more broadly? This report looks at a series of open source indicators for the trucking sector and finds a downturn could be nigh.

The Producer Price Index for truck services, for both full- and less-than-truckload, hit a record high in March according to Bureau of Labor Statistics data shown in Figure 1. Despite that, industry commentators have warned that a downturn could be around the corner. So why are trucking rates so high? 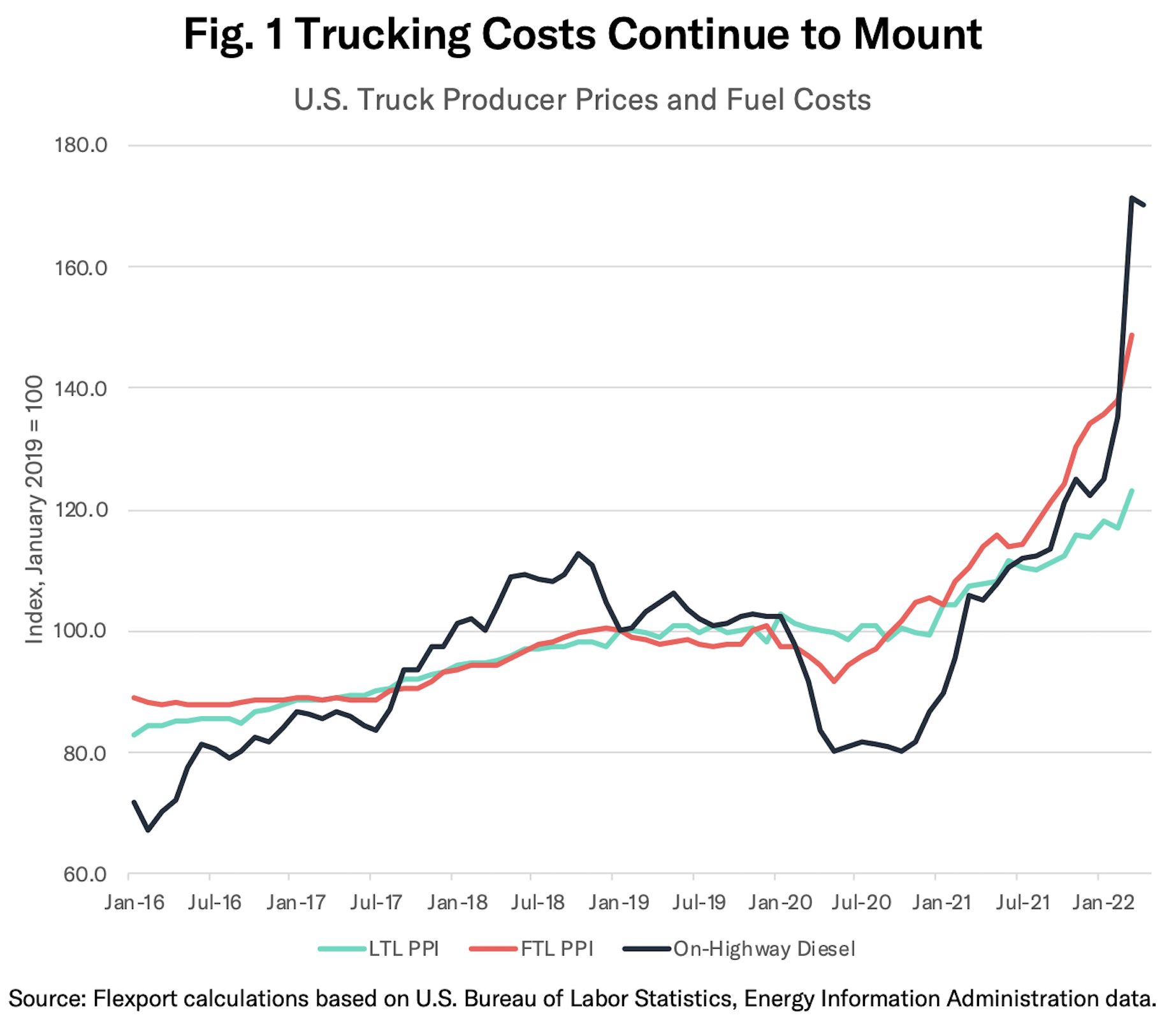 Fuel costs, the black line in the chart above, are a clear driver and have risen because of the pressure on commodity markets caused by the conflict in Ukraine, as discussed in recent Flexport research. Truck operators are also facing higher costs for insurance, maintenance and other operating items according to Freighwaves.

Putting aside costs - which could rapidly decline depending on global macroeconomic and geopolitical factors - the demand side of the equation looks lackluster. 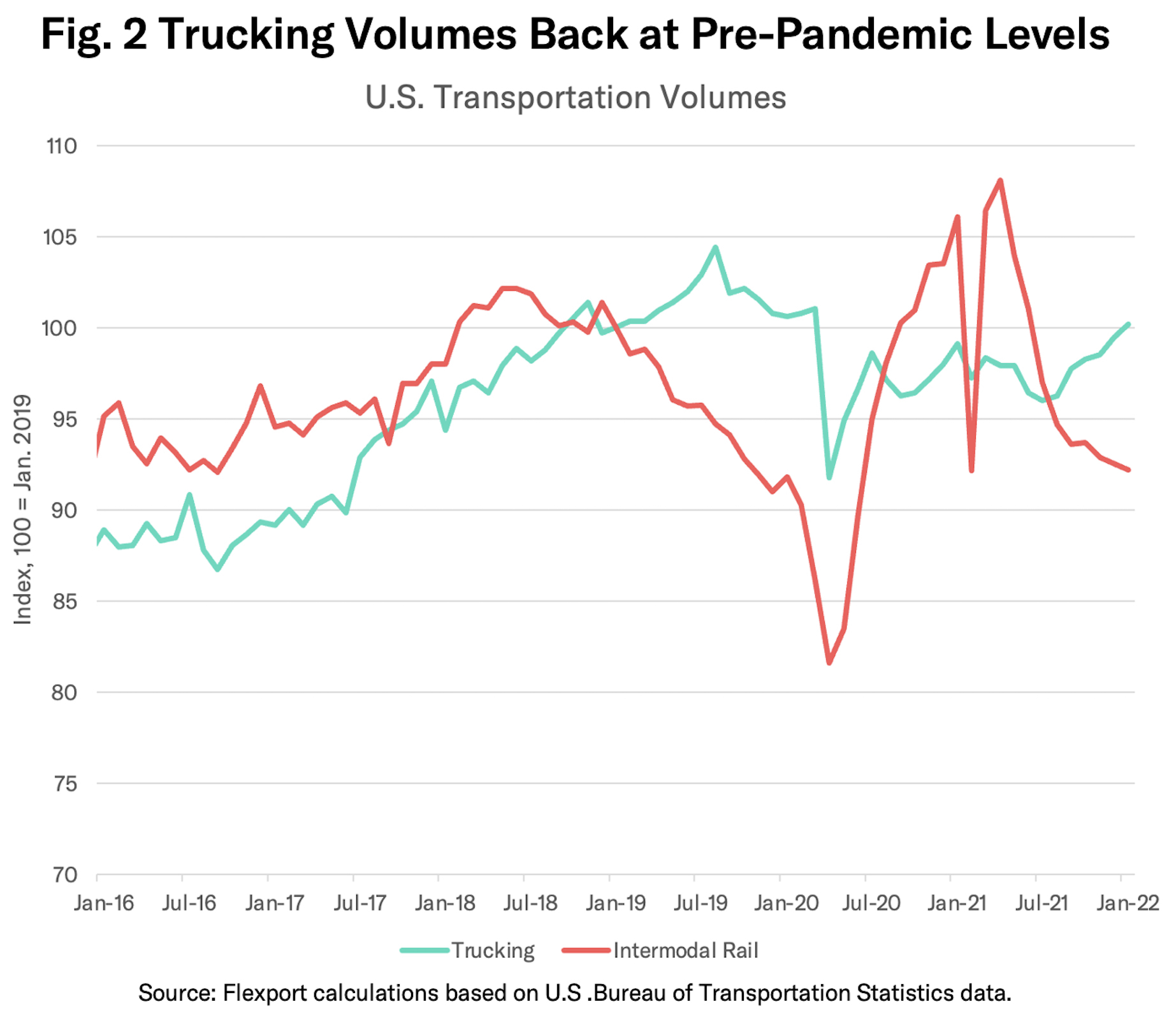 Trucking and intermodal rail handling can be interchangeable, though the latter offers lower service levels at a lower cost and is only applicable in certain situations. As shown in Figure 2 above, truck handling in the three months to February 28 was 1.5% higher than a year earlier but down by 0.3% compared to the same period of 2019.

Intermodal rail volumes meanwhile have dropped by 8.2% in the past three months versus a year earlier and have proven volatile as rail is used to try and unclog U.S. seaports.

That compares to handling at the top 10 U.S. container ports which were unchanged in the three months to February 28 versus a year earlier and up by 9.0% compared to 2019, as shown in Flexport’s Logistics Pressure Matrix.

The outlook for demand is largely a function of supply chain activity and in turn the prospects for consumer and industrial spending. Flexport’s Post-Covid Indicator and Logistics Pressure Matrix both give pause for thought in that regard.

From a supply side perspective the thorny question of driver and equipment availability need to be addressed. 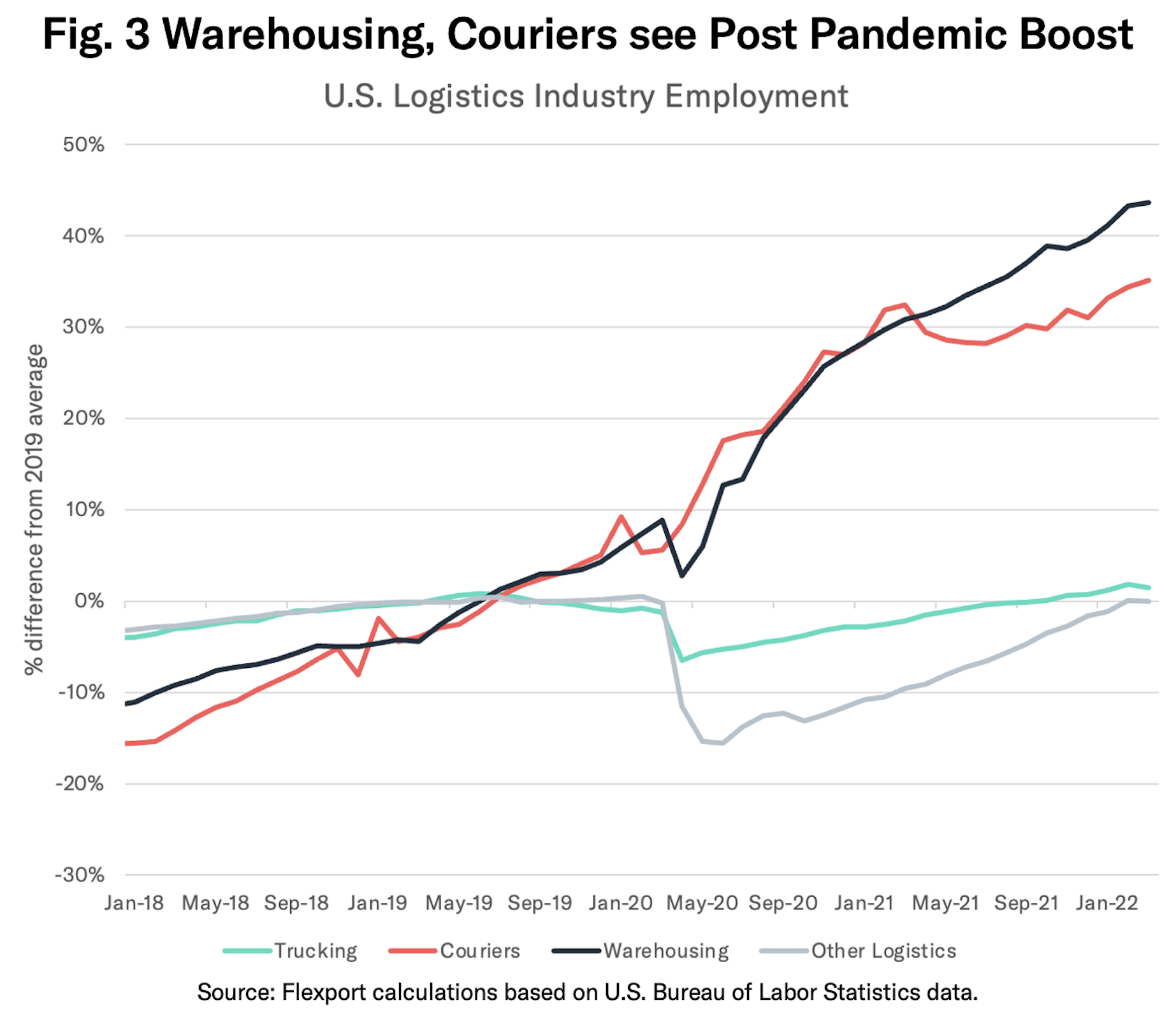 The “driver shortage” has been a focus of much debate regarding higher rates and has driven the Biden administration to push for increased license issuance while fleet operators have offered higher wages.

It can certainly be seen in Figure 3 that driver employment levels in the trucking sector have lagged behind warehousing and couriers—in theory all three are beneficiaries of the shift to consumer spending at home brought by the pandemic. Employment in the trucking sector was just 1.5% higher in March 2022 compared to the 2019 average while warehousing and couriers increased by 43.6% and 35.2% respectively. 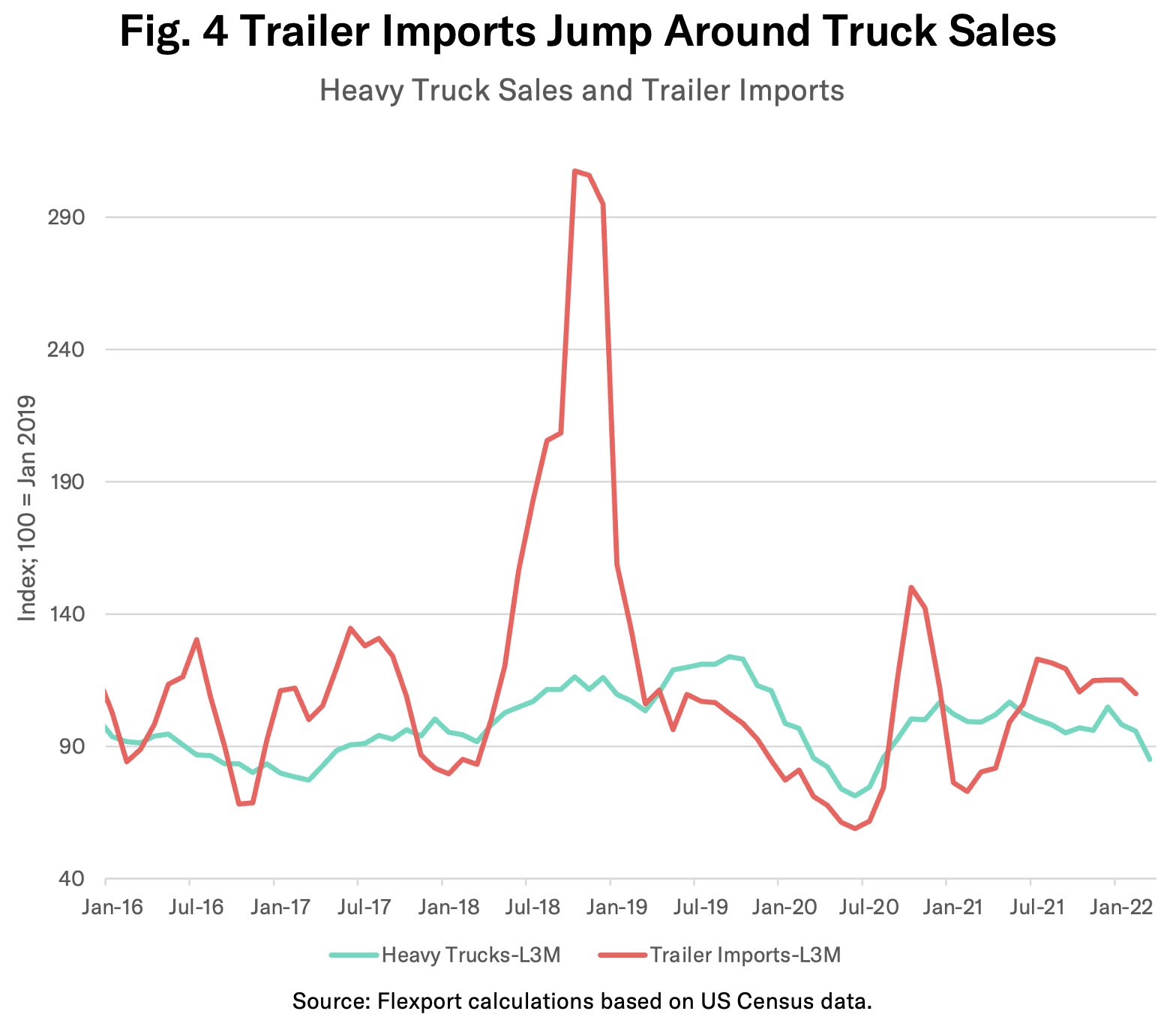 Drivers are of no use without equipment, and vice versa. The equipment side of the supply equation also looks weak and may reflect reduced confidence in the sector. The sales of Class 8 heavy trucks fell by 14.1% year over year in Q1’22 and by 17.7% compared to the same period of 2019. Orders for trucks increased by 14% in Q1’22 versus Q4’21 but were 50% below Q1’21 according to data from FTR Transportation Intelligence.

Trailer chassis availability meanwhile, a prior concern for long haul trucking and drayage, has been helped by a 50.6% year over year increase in the three months to February 28 (HS 8716.39.0090, Source U.S. Census Bureau). Yet, the picture is distorted by the impact of tariffs on imports from China and imports were down by 19% compared to the same period of 2019.

Conclusion: Trucking rates have potentially been driven up by higher fuel costs among other factors. A recovery in demand during the pandemic has not been significant but has come at a time of challenges for driver availability and production of trucks. A downturn in demand, particularly for imported consumer goods, could rapidly turn the fortunes of the trucking industry.