The latest US retail sales numbers, when smoothed and adjusted for inflation, show overall economic activity proceeding at a modest pace. Underneath that surface calm, though, are wild swings with some sectors seeing notable growth and others enduring painful contraction.

In Focus - US Retail Sales 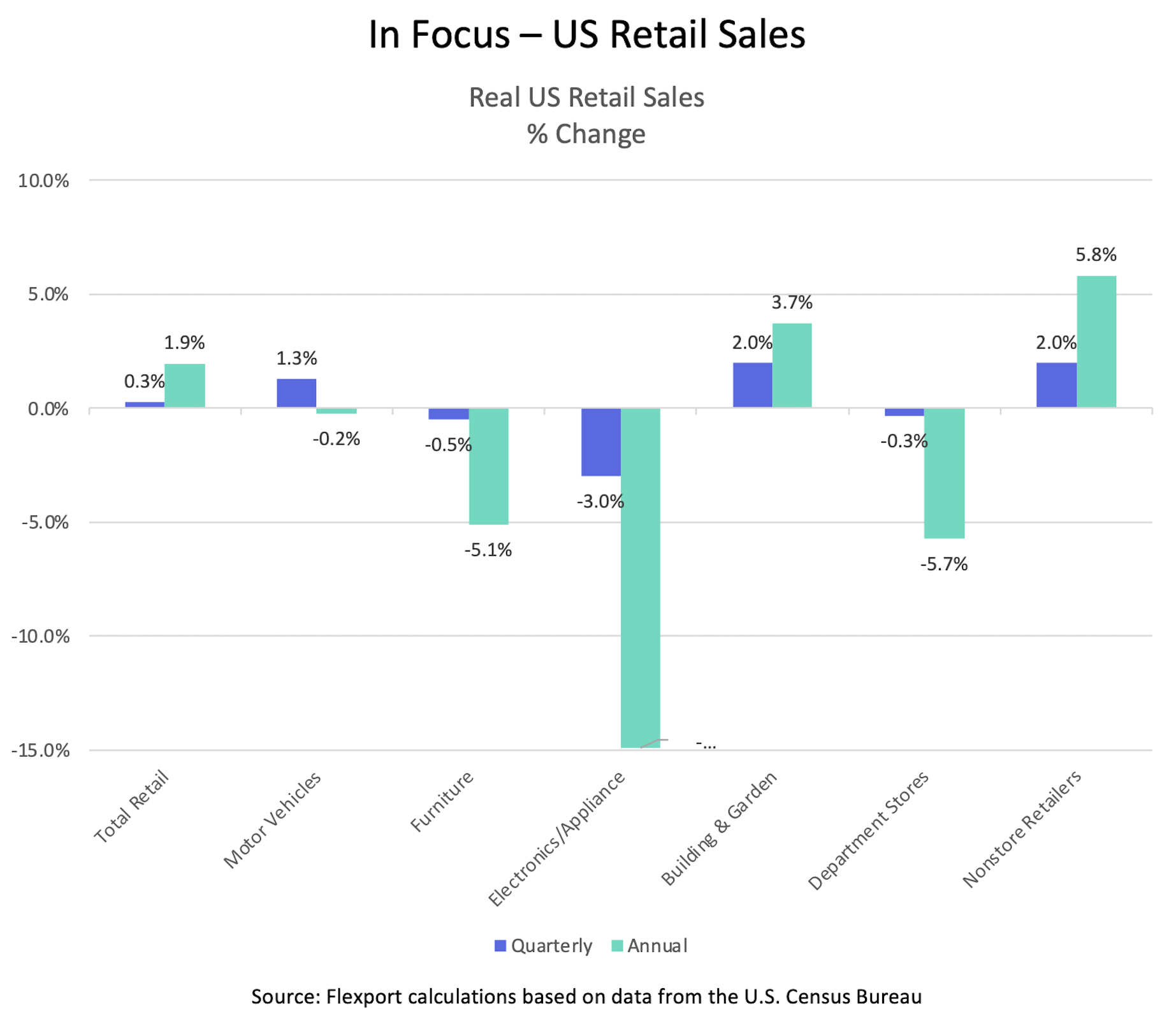 The headline news this past week for retail sales was that the October total (including food services) was up 1.3% from September and 8.3% from October a year earlier.

For anyone trying to keep tabs on whether the economy is slowing or steaming ahead, however, those are difficult numbers to interpret. First, these consumption patterns can be volatile, swinging from month to month. Second, while the numbers are seasonally adjusted they’re nominal. That should be solvable by subtracting off inflation, but which inflation measure to use?

This week’s chart offers help on both counts. The comparison is between the latest three months reported—August through October of 2022—and either the same three months a year before (marked annual) or the three preceding months, May-July (marked quarterly). This smooths out some of the volatility.

Then, the numbers are deflated by the component of the Consumer Price Index that describes “all commodities, less food and energy.” This is not as precise as taking an index for each subcategory, but is notably more practical. For reference, that index was up 6.3% for the annual comparison and 0.6% for the quarterly. The chart shows the results for the total and for selected subcategories.

So what do the revised numbers say? That in aggregate, retail sales have been fairly smooth over the past year. Total retail is up 1.9% after inflation. The most recent quarter marked a slowdown, as the 0.3% increase corresponds to a 1.1% annualized number. This all is roughly in line with Personal Consumption Expenditure numbers, though those have not been released yet for October.

The other big story to emerge from the numbers is the wildly different sales rates experienced by different sectors. Underneath the smooth aggregate number is a lot of sectoral turbulence.

The most extreme drop is in ‘electronics and appliance stores,’ down 14.9% over a year and down 3.0% over the preceding quarter. ‘Furniture and home furnishings’ fell by 5.1% for the year and department stores by 5.7%.

Yet other categories did well. Nonstore retailers—catalogs and ecommerce—were up 5.8% in real terms for the year, 2.0% over the preceding quarter. ‘Building material, garden equipment, and supplies’ were up 3.7% for the year and 2.0% over the preceding quarter. ‘Motor vehicles and parts’ had a relatively strong quarter which contributed to a roughly flat year. The total numbers were also boosted by sales at gasoline stations (not shown in the chart).

Two lessons that jump out. First, the pattern of smooth aggregate numbers and divergent experiences across subcategories suggests caution in drawing broader macroeconomic conclusions from sectoral anecdotes. The more detailed estimates show that some sectors are having a truly difficult time. But that shouldn’t blithely be extrapolated to the whole economy.

The second lesson is that, for the broader economy, the retail sales numbers are consistent with other indicators that show modestly positive but slowing growth. The much-anticipated recession has yet to show up in the numbers. We’ll keep watching.

The Flexport Ocean Timeliness Indicator for Transpacific Eastbound (TPEB) routes and Far East Westbound (FEWB) routes both decreased. TPEB stands at 75 days, matching the fastest time since January 2021 and FEWB stands at 82 days, in line with the average level since late May 2021. Flexport’s Air Timeliness Indicator meanwhile saw a slight increase in Far East Westbound, going from a 10.0 day to a 10.4 day average in the 4 weeks leading up to November 20, 2022. Transpacific Eastbound (TPEB) decreased further to 8.3 days from 8.5 days.

The latest Flexport Consumption Forecast shows modest growth in consumption, whether measured as Q4’22 over Q4’21 (up 0.6%) or over the four forecast months which run through January 2022.

The latest update to our Post-Covid Indicator shows a modest growth in consumption.

Our Trade Activity Forecast calls for imports to dip sequentially on a real (i.e. inflation adjusted), balance of payments, seasonally adjusted basis by 1.2% in October after strong growth in September.

A New York Federal Reserve report on US household debt showed an increase of $351bn or 2.2% in Q3 of this year. In addition to a large increase in mortgage balances, that included a 15% increase in credit card balances that was the largest in 20 years.

The broad US Producer Price Index (PPI) rose by 0.2% in October and was up 8.0% from a year before. A core measure excluding food, energy, and trade services was up 5.4%, a figure that has declined steadily from 7.1% in March. While encouraging, even this lower figure remains well above the Fed’s 2% target inflation rate.

US manufacturing output edged up slowly in October, rising by 0.1% over the previous month and 2.4% over the previous year. That followed downwardly-revised monthly growth of 0.1% in August and 0.2% in September. Capacity utilization fell by 0.2 percentage points in October to 79.9%, just above its long-term average.

UK Consumer Price Inflation was 11.1% in the year to October, a 41-year high. Gas, electricity, and food prices were major contributors to the rise.

Japan’s GDP contracted at a 1.2% annual pace in Q3. It was the first negative quarter in a year. One factor was the high import bill associated with a dramatic weakening of the yen. The yen started the year at 115/$ and was near 145/$ by the start of October.

Chinese retail sales fell by 0.5% in October from a year earlier. That compared with expectations of a 0.7% rise in one survey and with a 2.5% increase in September.

A new study of the trajectory of US debt showed that it is likely to cross back over the notional 100% of GDP threshold next year and then begin climbing sharply after that. One consequence is that interest spending is likely to rise from its current level under 2% of GDP to over 3% of GDP within five years.

A new budget package from the government of UK Prime Minister Rishi Sunak included roughly £25bn in new taxes and £30bn in spending cuts, a frugal reversal from the plan announced by his short-tenured predecessor, Liz Truss. The British pound fell slightly on the day of announcement to $1.18/£. That’s down 12.3% year to date, but up from its recent low of $1.03/£.