The Weekly Economic Report will rejoin you in the New Year, with our next issue on January 9, 2023

Three major central banks hiked their policy rates by 50 basis points this past week, as they raced to catch up with high inflation. A key question for 2023 is whether central bankers will stand by their commitment to keep rates “higher for longer” than markets seem to expect. 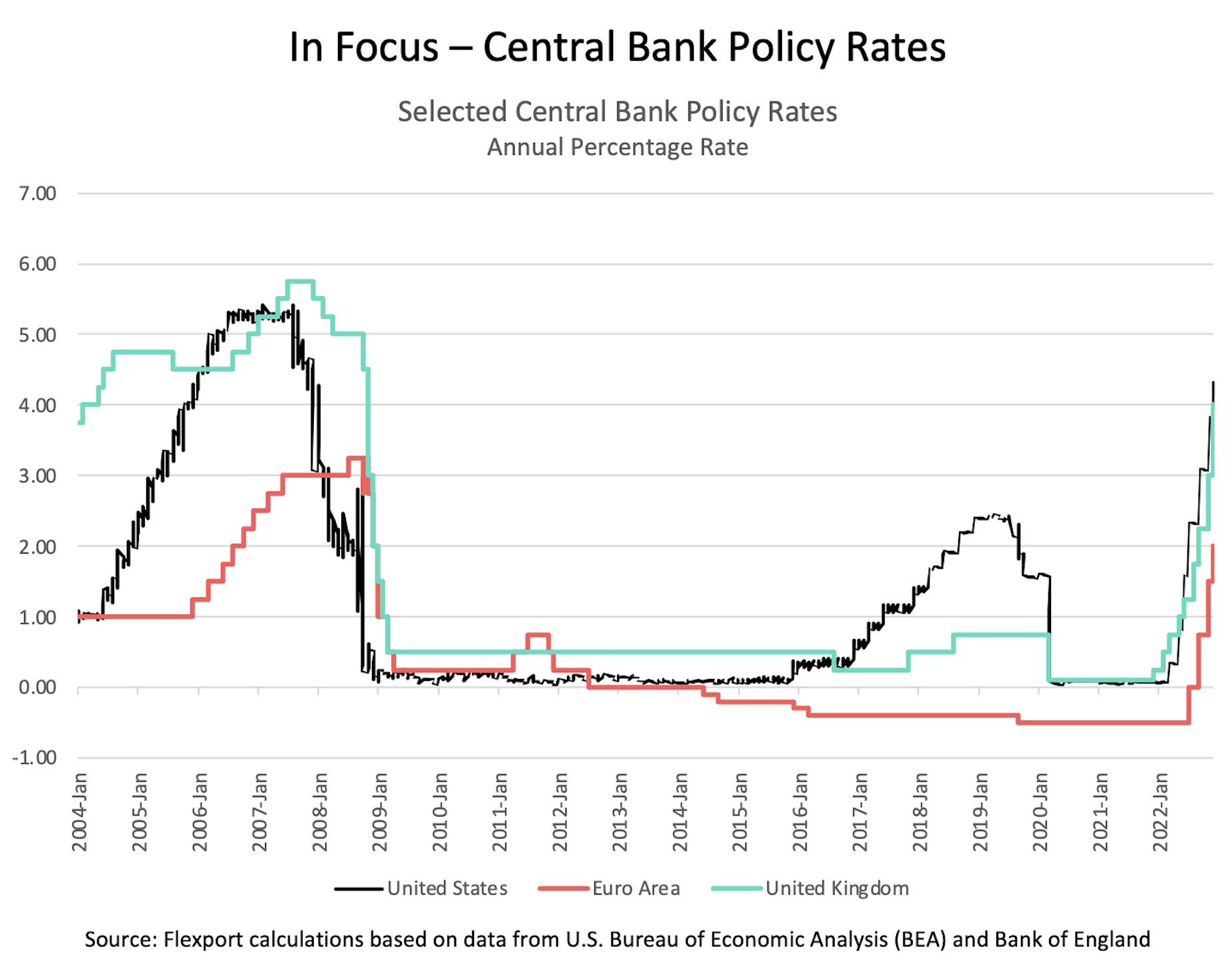 Some of the most illustrious institutions of the post-World War II economic order are premised on the idea that the world will be better off with coordinated economic policy. The International Monetary Fund, the OECD, the G-7 and the G-20 have all had stints of prominence attempting this role.

Yet, if one looks over the last twenty years, most of which are depicted in the chart above, evidence of coordination was hard to see in monetary policy. The chart shows the main policy rates for the US Federal Reserve (black), the European Central Bank (red), and the Bank of England (green). Even in the aftermath of the global financial crisis of 2007-2008, the US and the UK held steady while the European rate descended into negative nominal interest rates. In the leadup to the Covid-19 pandemic, the Fed was raising rates relatively quickly, the Bank of England relatively slowly, and the ECB was going from low to lower.

This past week was remarkable in that the three central banks seemed to be marching in lockstep, even without any official overt coordination. On Wednesday, the Fed raised its policy rate by 50 basis points (half a percent). On Thursday the ECB raised its policy rate by 50 bp, and the Bank of England did the same. Not only were they making parallel moves, but as the steep rise at the end of the chart shows, this is a pace of tightening that has no precedent in recent decades.

So what does it mean? First, it shows that inflation is a transatlantic problem, even if there may be different causes. Second, the de facto coordination should calm some of the swings we’ve seen recently in exchange rates, as the dollar has backed off somewhat from its recent surge. Third, it shows that central banks were behind; the strong persistent inflation caught them by surprise and they are still racing to catch up—even if the Fed scaled back from 75bp to 50bp.

Finally, it raises the question of where demand will come from if there’s a synchronized slump. One advantage of having major economies out of sync is that, if tightening is overdone and a recession kicks in, the slowing economy can sell to trading partners with stronger growth. That won’t be true if these economies are all descending in formation.

But central banker statements of this past week showed more concern about economies running too strong than too weak. Both Fed Chairman Powell and ECB President Lagarde vowed to keep pushing on with rate hikes and hold them until inflation dropped back to target levels.

Markets seemed skeptical. As the chart shows, there are no good examples over the last 20 years of rates staying “higher for longer.” Rounds of hikes were generally followed by rapid drops. A key economic question for 2023 is whether these central bank commitments will hold, with or without international coordination.

Flexport’s annual, year-end "State of Trade" webinar featured Founder and Co-CEO Ryan Petersen and Chief Economist Phil Levy on the logistics and economic headlines of 2022 and a look ahead to 2023.

This week we refreshed our forecasts for the Post-Covid Indicator (PCI), the Trade Activity Forecast (TAF), and the Flexport Consumption Forecast.

The US Consumer Price Index (CPI) rose at a 7.1% annual rate in the year to November, the lowest 12-month reading since December 2021. The increase for the month was 0.1%, down from 0.4% in October. The core CPI—excluding food and energy—rose by 6.0%. There is a notable divergence between inflation in goods and services. The category of “commodities less food and energy commodities” is up 3.7% for the year to November, while “services less energy services” is up 6.8%.

US retail sales were down 0.6% for the month, but up 7.7% in the year to November. Those figures are not adjusted for inflation, so that has retail sales holding roughly flat in real terms over the past 12 months. The largest growth categories over the past 12 months were gasoline stations and “food services and drinking places.” The biggest drop was in electronics and appliance stores.

Manufacturing production dropped in the US by 0.6% from October to November. It was the biggest fall since the month of June. From November 2021, the figure has risen by 1.2%. Manufacturing capacity utilization fell to 78.9%, its lowest level since June.

Euro Area annual inflation was 10.1% in November. While still elevated, the rate was down from 10.6% in the year to October. Among member countries, the lowest rate was in Spain (6.7%) while the highest was in Hungary (23.1%). The largest contributing price category was energy.

Euro Area exports of goods were up 18.0% in the year to October. Imports rose 30.7% over the same period. For year-to-date export growth, the fastest pace was with the United States. For imports year-to-date, the US finished second to Norway in growth rate.

Congress passed and President Biden signed a continuing resolution that funded the government and averted an end-of-week government shutdown. It was a short-term measure to buy time, set to expire after Dec. 23.

European national governments and the European Parliament agreed on how to tax imports according to their environmental impact, the Carbon Border Adjustment Mechanism. The program, if adopted, is set to begin in October 2023 with emission reporting requirements on certain goods.

The US Trade Representative’s office extended 352 product exclusions from the Section 301 tariffs on imports from China. The exclusions had been set to expire at the end of the year and were extended for 9 months.

Two former high-ranking US trade officials put forward a plan for the US to rejoin the CPTPP (the successor to the TPP). The proposal came as the Biden administration joined in the first round of negotiations for the Indo-Pacific Economic Framework, an alternative approach that largely eschews market opening.