Flexport’s Trade Activity Forecast augments traditional economic techniques for predicting U.S. merchandise imports and exports with Flexport’s proprietary data. In the latest update we expect imports to dip sequentially on a real (i.e. inflation adjusted), balance of payments, seasonally adjusted basis by 1.2% in October after strong growth in September. Exports are expected to rise by 1.0% on the same basis. Import growth is seen resuming after October.

The Methodology: The Flexport Trade Activity Forecast combines traditional economic statistics alongside Flexport’s proprietary data and analysis to generate a forecast of US merchandise import and export trade growth. The use of additional data has been particularly important since the advent of the pandemic and resulting shift in trade patterns away from historic averages. See our primer report for more details.

Update November 17, 2022: The central version of Flexport’s Trade Activity Forecast presented here is a balance of payments version with seasonal adjustment (BOPSA) and correction for inflation. This best answers the question of whether this sector of the economy is performing better or worse than one would expect for a given time of year. The website also offers a Census, non-seasonally adjusted version better suited for users looking for a guide to activity within supply chains on a short-term basis. When adjusting for inflation, this captures the unadulterated forecast of how many goods are expected to cross U.S. borders compared to a year earlier. 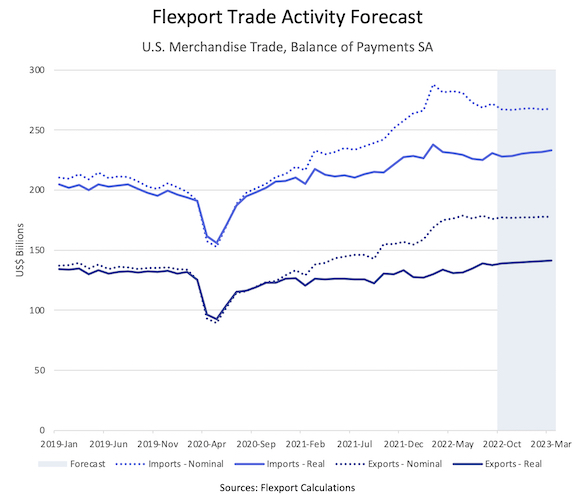 Figure 1 shows both real and nominal values for imports and exports, dating back to the start of 2019. The nominal (dotted) figures mostly serve to illustrate how misleading unadjusted numbers can be. We’ll focus here on the real (solid) values.

While the import forecast calls for a dip in October after a stronger September, the longer-range forecast is that real imports will grow by 1.1% from September 2022 through March 2023. Exports, over that time period, are set to grow by 2.7%, though from a lower base. For those looking at contributions to GDP calculations, from January 2022 to January 2023, we forecast that real imports will grow by 1.2% while real exports grow by 9.7%.

As a consequence of the faster export growth, the implied negative net export balance (aka trade deficit) is expected to dip to $268 billion in Q4’22 before rebounding to $274 billion in Q1’23. That will still be well below the $308bn in Q1’22. That should serve to augment GDP estimates. 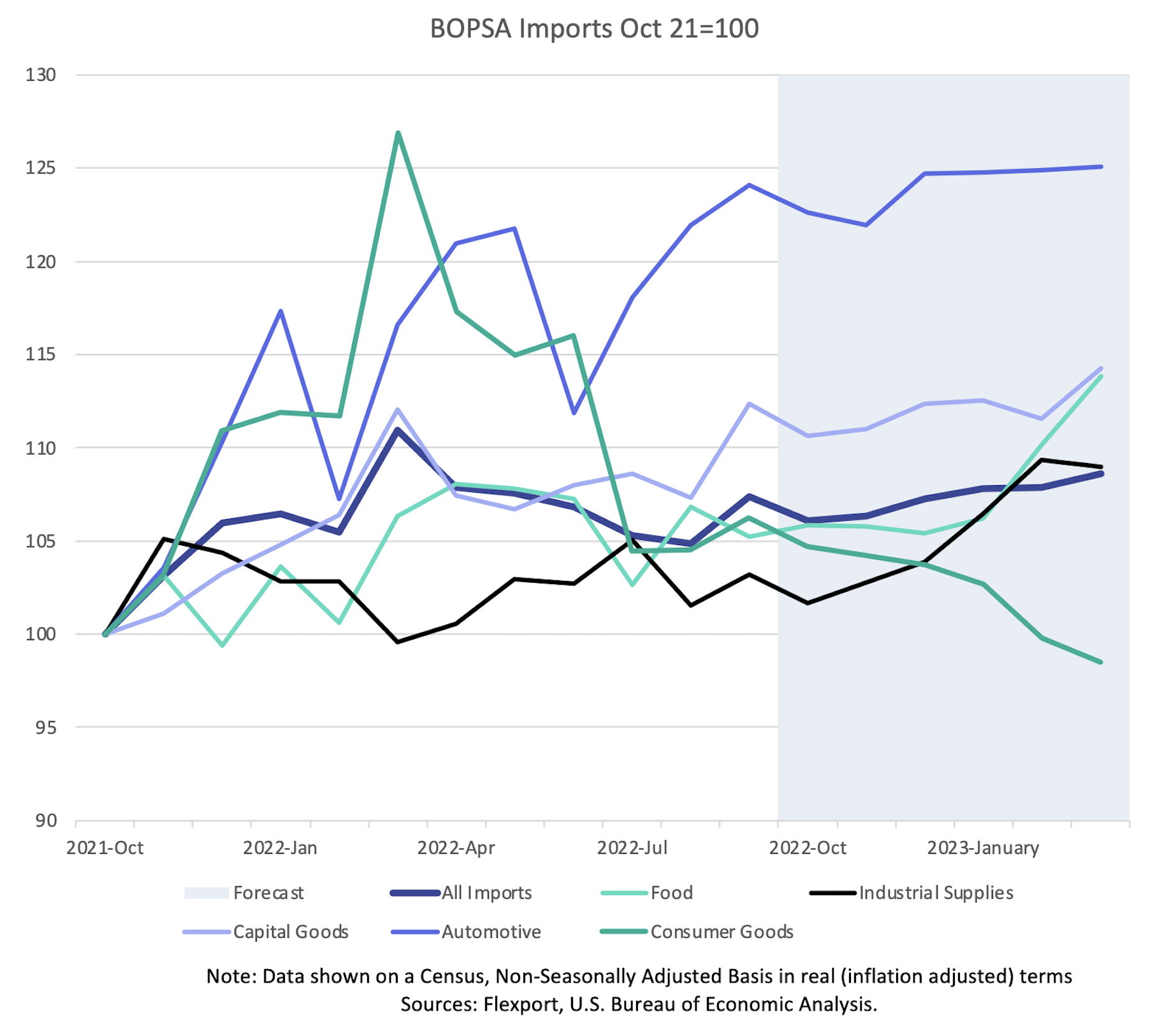 The relative calm of overall US imports (the dark, thick line in Fig. 2) conceals substantial turbulence within the major subcategories. Although the subcategories vary a great deal in terms of volume of trade, the figures are rebased so that one year before the first forecast date—October 2021, in this case—is set to 100.

After soaring by more than 25% a year ago, real consumer goods imports have dropped back down and are forecast to drop below the October 2021 level by March of 2022. In sharp contrast, automotive imports strengthened a little later, but are forecast to hold those gains, ending up roughly 25% higher. With capital goods imports remaining strong and food imports forecast to pick up into the new year, it is really the consumer goods sector that looks like the outlier. 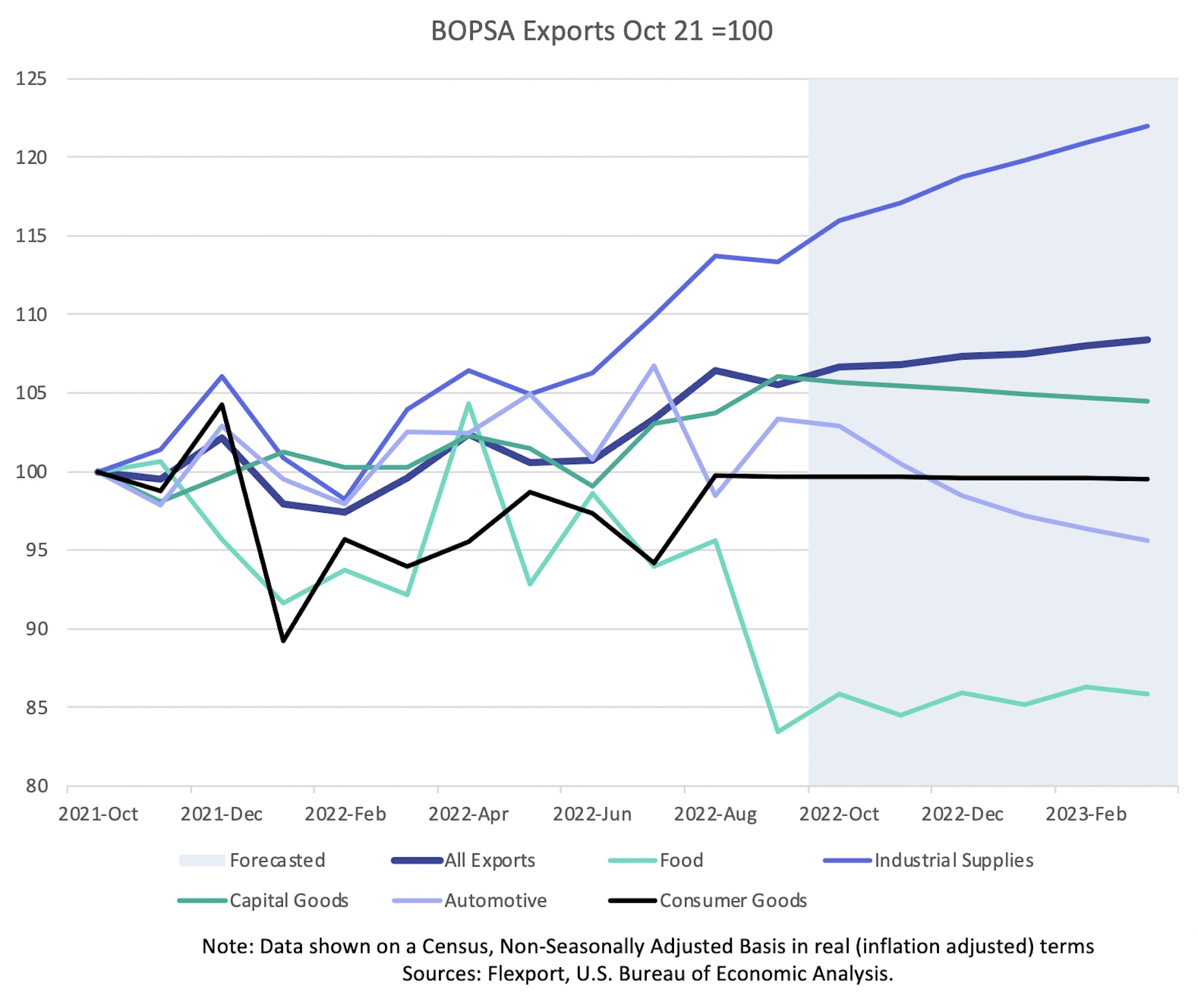 Figure 3 conducts the same exercise for exports, looking at percentage changes for the year leading up to our first forecast month, thus from October 2021. For exports, there’s a clear leader: Industrial supplies. This isn’t such a mystery when one looks at the top three growing components within the category: 1. Crude oil, 2. Other petroleum products, 3. Fuel oil.

The forecast increase in industrial supply exports almost entirely explains the predicted export growth. If one looks at forecast real export growth from September 2022 to March 2023, industrial supplies are seen to grow 7.6% and food by 2.9%. The other major categories all drop over that time: consumer goods down a slight 0.1%, capital goods down 1.5%, and automotive down 7.5%.

The US Census Bureau will publish October 2022 data on December 6, 2022. The next update of the Flexport Trade Activity Forecast is scheduled for December 15, 2022.