Last week’s U.S. jobs report offered both a very low unemployment rate and a small decrease in the labor force. On balance, though, the labor market looks historically strong. This offers little sign of a recession and little relief for Fed concerns about inflation. 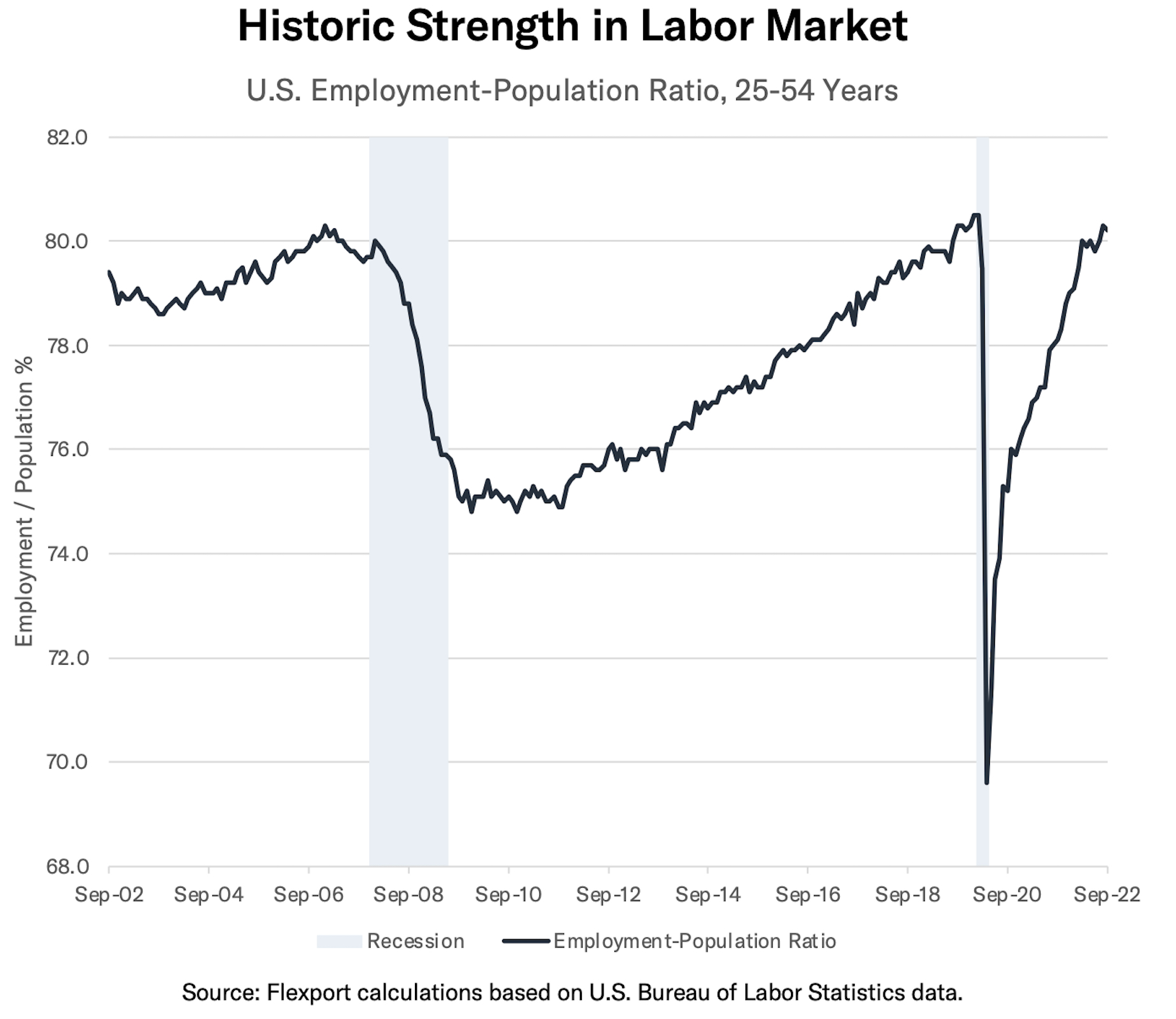 The most eye-catching of the new U.S. labor statistics released last week was the 3.5% unemployment rate. This equals the low touched in January, February, and July of this year. Before that, it was last seen in 1969.

There were some hints of cooling. The 263K new jobs was down from 537K in July and 315K in August and was the lowest level since April 2021. The fall in the unemployment rate was influenced by a small decline in the labor force (57K).

The employment-population ratio actually nudges down for the month, from 80.3% in August to 80.2% in September. But over the 20 years depicted in the chart, there have only been 10 months (4.1%) where that ratio was 80.2% or higher.

For avid readers of the business section of the newspapers (or the online equivalent), this may pose something of a puzzle. Stories abound of layoffs or hiring freezes at major corporations. How do we reconcile this with the picture of a humming labor market?

The answer is gross. The numbers one normally hears from a jobs report are net; the 263K in September was the difference for the month between jobs gained and jobs lost. But the gross numbers for gains and losses in the US economy are huge. Over the last two years for which data is available (September 2020 through August 2022) the average monthly gross gain in jobs was 6.3M. The average monthly gross loss was 5.8M, with a difference of 508K.

This was a period of strong recovery from the pandemic-induced recession, but even so there were an average of almost 6M job losses per month. That allows for plenty of layoff stories. There’s no contradiction between gross job losses and net job gains; that’s the norm for a vibrant labor market.

Even within the net numbers, there were gains and losses by industry in September. All of the goods-producing industries showed net increases, but the much larger service-providing industries were split. Education and health services added 90K jobs, while Financial and ‘Transportation and Warehousing’ each dropped about 8K. Government employment was down 25K.

There is a reason that economists focus on the unemployment rate, rather than the job change numbers. The argument is that when unemployment gets sufficiently low, the only way for an employer to attract new workers is to raise wages. In fact, the September report showed that average hourly earnings rose by 5.0% over the past 12 months, slightly ahead of the Fed’s preferred inflation measure. It is the potential for wages and prices to push each other up that will worry monetary policymakers.

Recent Flexport research includes a review of our recent State of Trade webinar on the topic of logistics network conditions. We found shipping times and prices suggest supply chains are improving. Yet, there are considerable unknowns including persistently high consumer spending and the evolution of corporate inventory strategies.

U.S. retail inventories increased by 1.1% in August vs. July, or 0.4% excluding autos. The resulting 1.16x inventory-to-sales ratio, excluding autos, was the highest since May 2020 but still below the 2019 average of 1.22x. Corporations have generally indicated they are looking to cut inventories during the remainder of 2022.

U.K. consumer confidence set yet another 48-year low in September, with consumers’ outlook for the economy and personal finances over the next 12 months continuing to fall. Notably, savings intentions also fell despite rising interest rates.

U.S. manufacturing activity expanded at its slowest rate since May 2020 in September, according to the latest ISM Manufacturing Report on Business survey. A reading of 50.9 (over 50 indicates expansion) was down from 52.8 in August.

The World Trade Organization has released new forecasts for global trade. It has upgraded its 2022 forecast to growth of 3.4% (from 3.0% at its April forecast) after slightly better-than-expected activity in H1’22.

South Korea’s export growth slowed to 2.8% on a nominal basis in September, down from 6.6% in August. On a seasonally adjusted growth was just 0.4%, the slowest since October 2020. A slowdown in commodities led the way, with exports of petrochemicals and steel down by 10.3% and 15.1% respectively. Exports of semiconductors fell for a second month, by 5.7%.

The EU, United States and U.K. have all launched new rounds of sanctions against Russia in connection to the conflict in Ukraine, following Russia’s annexation of four Ukrainian regions.

The OPEC+ group of oil producing nations agreed to cut their output by 2 million barrels per day (mbpd), equivalent to 2% of global supplies. That’s equivalent to a quota reduction of 1 mbpd as some members are producing below quota. Oil prices have risen to $95 per barrel on October 7 from $85 per barrel on September 26.

The U.S. government has launched new restrictions on the export of semiconductors to China. The rules cover AI and supercomputing devices that may have military dual uses. They also include exports from third countries that use U.S. technology. The move should be seen against the backdrop of wider U.S.-China rivalry.

U.S. exporters may not be exposed to new EU Carbon Border Adjustment Mechanism rules, according to the European Commission. That would affect products where emissions-per-ton are similar to, or lower than, those applying in the EU. The EU recently extended the range of products covered by CBAM.

Port strikes in the U.K. look set to continue, with workers at Liverpool announcing further strike action from October 11 to 17. That follows the current strike at Liverpool and potential further action at Felixstowe.

U.S. automotive manufacturing increased by 9.7% sequentially, on a seasonally-adjusted basis, in August and by 32.3% versus a year earlier. While that suggests supply chain pressures may be improving, production was still 23.9% lower than August 2019.

U.S. orders for Class 8, heavy duty trucks doubled year over year to a record 56,500 vehicles in September. That partly reflects a willingness by truck manufacturers to take orders for 2023 deliveries now that there’s improved component availability. Pent-up demand partly includes the need to replace older equipment, which has been postponed over the past two years.

Global air freight activity has continued to decline, dropping by 8.3% year over year in August, according to IATA, and by 2.9% compared to August 2019. Capacity increased by 6.3%, leaving capacity utilization for the global cargo fleet at 46.7%, the lowest since February 2020.

The EU is close to agreeing new rules for natural gas pricing, aimed in part at offsetting the rise in energy costs linked to the conflict in Ukraine. These could be as simple as a temporary price cap and as complex as a reform to natural gas price trading benchmarks. Whatever the rules, they will need to be agreed by all member states.

Chart of the Week - Things That Go Bump in Supply Chains 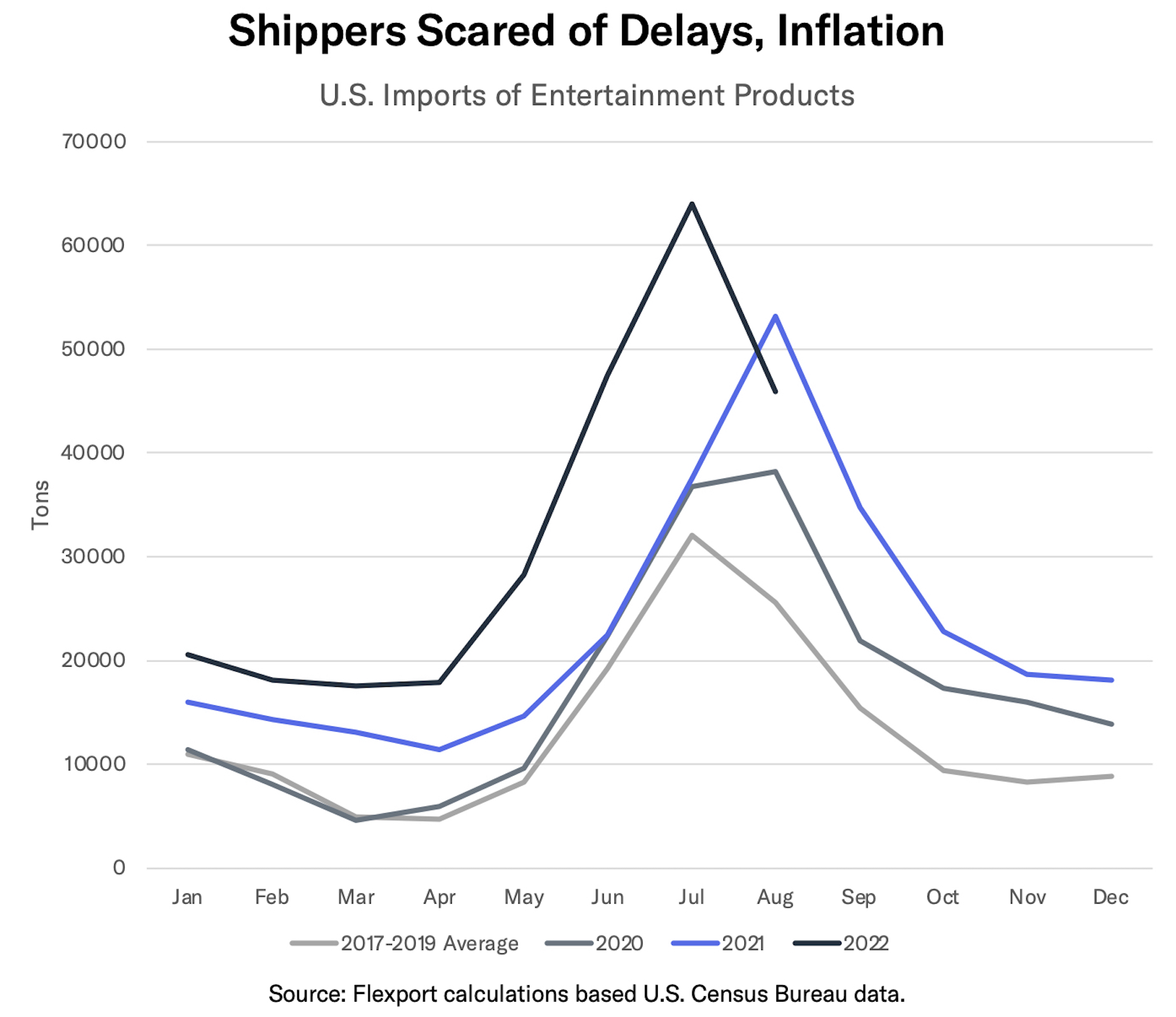 The National Retail Federation has indicated that U.S. spending on Halloween celebrations could rise by 5% year over year in 2022. Costume spending is expected to lead the way, with 28% of spending.

Retailers appear well prepared. The chart above shows U.S. imports of “festive, carnival or other entertainment, excluding Christmas” products (HS 9505.90), which includes Halloween outfits and decorations. In 2020 and 2021 imports peaked in August. In 2022, imports peaked in July. That matches a trend in the toy industry where shippers have moved early to avoid prior years’ shortages.

In the two months of July and August combined, imports rose by 21.2% year over year in volume terms and have set a new record. The specter of inflation hangs over Halloween - the average import value per unit rose by 8.6% over the same period.