In a major speech, Fed Chair Jay Powell predicted a prolonged battle to bring down inflation. While there have been some positive inflation numbers of late, the more positive numbers were the less reliable ones. The Fed clearly sees prolonged, elevated inflation as a threat.

Programming Note: The Weekly Economic Report will come out on Tuesday next week, as we celebrate the U.S. Labor Day holiday. In the meantime you can catch up with all our reports and indicators at flexport.com/research.

In Focus - Inflation News vs. Noise 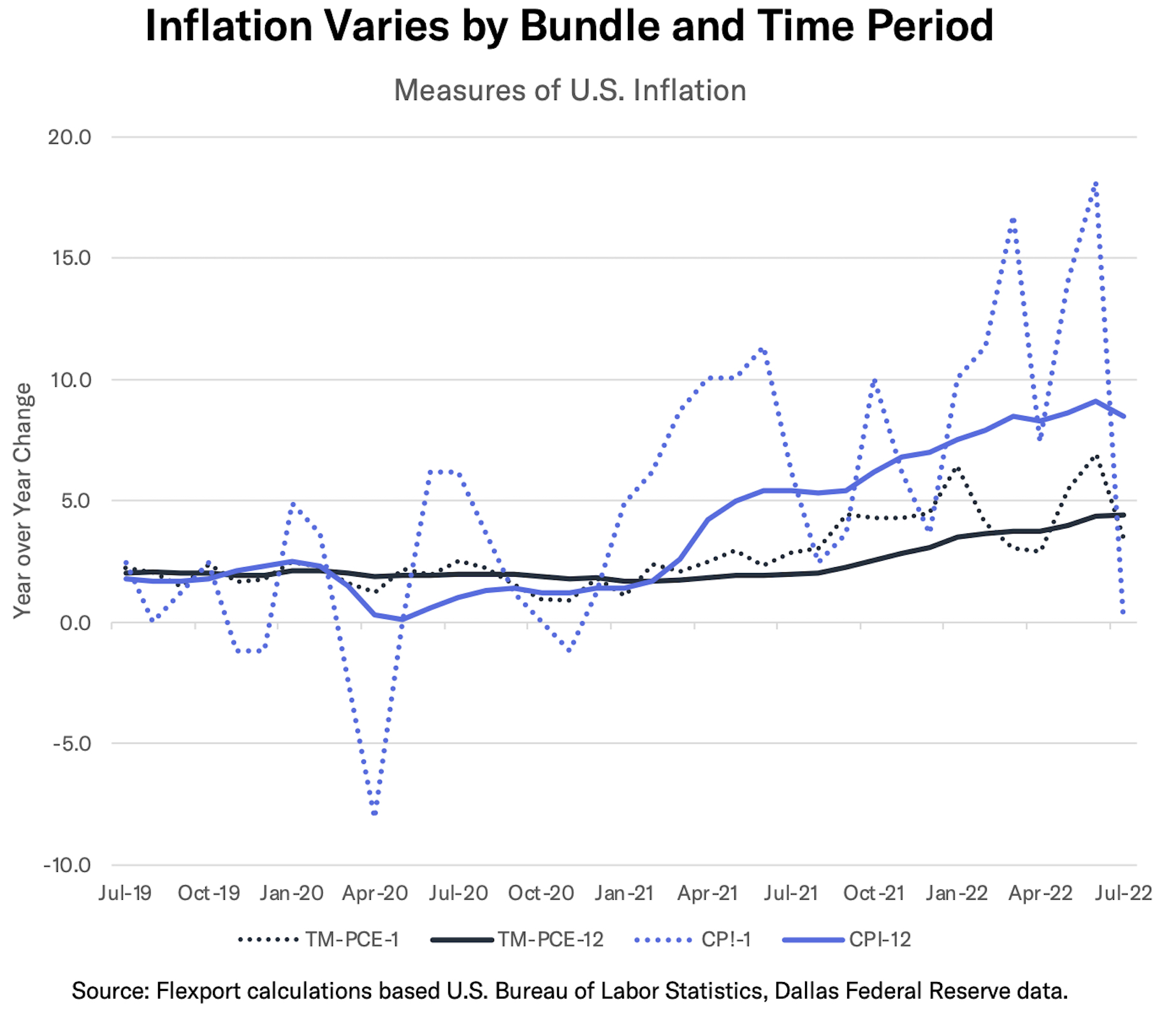 How can it be that a series of encouraging numbers showing moderating U.S. inflation were followed by a major Fed speech warning of a grim economic battle ahead?

The Fed worries about inflation, of course. But why weren’t officials heartened by numbers such as a 0.0% change in the Consumer Price Index (CPI) from June to July? OK, so the Fed might prefer another measure, like the Trimmed Mean Personal Consumption Expenditure deflator. But the annualized July one-month TM-PCE number released Friday was 3.4%, down from 6.9% in June. Shouldn’t that be reassuring?

The challenge with inflation is that there are multiple ways to measure it. The concept is straightforward: pick a bundle of goods, and track how the price of that bundle changes over time. But what bundle? And over what time period?

The biggest reason why one might prefer a more restricted, processed indicator is to avoid noise. If we take a relatively recent sample period, from January 2017 through July 2022, we find that the most common CPI inflation measure had an arithmetic average of 3.1%, while TM-PCE was 2.3%. That difference is not trivial, but it’s not wildly far off, either. Yet CPI measure is much noisier. It has a standard deviation of 2.3 versus 0.9 for TM-PCE.

To see what we mean by noise, compare the solid lines in the chart with the dotted ones. The former move in a fairly steady fashion, while the latter jump all around. The bouncy ones use 1-month price changes and extrapolate them to annual rates. The smooth lines show changes over the latest 12-month period. That means that the smooth lines are actually the accumulation of a year’s worth of the bouncy ones.

Now we come to the Fed’s concern. The relatively happier inflation numbers come from the noisier series. The series the Fed considers the most stable and reliable showed 4.4% inflation in July. That number, the 12-month TM-PCE, has not fallen since it was 1.7% in January of 2021.

The Fed’s concern is that this number is now well above its 2.0% target and it is not receding. We know this because Chair Powell said so in an admirably clear and concise speech this week. He said inflation levels tended to set people’s expectations for future inflation. High expectations tend to bring high inflation. He was unequivocal that it was the Fed’s role to beat inflation back and this was expected to require “a restrictive policy stance for some time.”

Thus, the happy inflation measures are not the ones the Fed trusts. Expect rates to keep moving up.

Recent Flexport research reports include our analysis of the potential impact of the port strike at Felixstowe, which got underway on August 21. It could take several weeks for the port to recover and the impact on global logistics networks to unwind.

The Flash August U.S. Purchasing Managers’ Index (PMI) from S&P Global hit 25- to 27-month lows in all its components. The corresponding composite Eurozone measure hit an 18-month low, though the manufacturing output component moved up slightly.

The final August reading of the University of Michigan’s U.S. Consumer Sentiment gauge rose 13% over July but was down 17% from a year before. The strongest improvements in sentiment were seen among lower-income respondents.

Taiwan’s export orders fell by 7.8% sequentially and by 1.9% year over year in July in U.S. dollar terms. On three of the 12 industry categories covered improved on an annual basis, with the drop led by plastics and base metals. Orders for electronics, including semiconductors, increased by 8.8% year over year, despite a 5.5% sequential dip.

The WTO’s Goods Trade Barometer has held constant for most of the past year. It indicates that a further slowdown in trade growth is due later in the year. A drop in electronic components supplies has worsened while container port throughput improved in July.

The Chinese government has applied a range of measures to tackle its slowing economy. They were led by a 13-point stimulus package, including one trillion yuan ($146 billion) of lending via state banks and local authorities. The plan also includes drought relief for power companies. There’s also been a reduction in the mortgage rate by the PBOC.

The South Korean government reportedly plans to work with the EU in launching an appeal against the new U.S. Inflation Reduction Act. The IRA will provide new subsidies for electric vehicles, as long as they are produced in the U.S. while ending credits for many vehicles produced outside the U.S.

Exporters of construction steel products from mainland U.K. to Northern Ireland may have to pay 25% tariffs in the coming quarter. That’s the result of (a) Northern Ireland remaining within the single customs area as a result of Brexit and (b) EU import quotas having been used up by other countries.

The impact of China’s heatwave on manufacturing has spread to Shanghai, with reduced water flow on the Yangtze a particular concern. That reportedly led at least two automakers to review their production schedules.

The Felixstowe port strike continued this week. The Unite union has stated that, even after the current strike ends, there are plans for further industrial action before the end of the year. The container lines are also starting to make plans for a strike at Liverpool, though a firm date for that strike has yet to be confirmed.

A new report from Adobe shows that prices for toys bought online fell by 8.2% year over year in July, while electronics fell by 9.3%. That would suggest that retailers are clearing their inventories ahead of new deliveries for the forthcoming peak-season.

A series of cities in California have declared moratoriums on the construction of new industrial facilities, including warehouses. Local noise and traffic-related pollution studies and monitoring are being cited as reasons for the slowdown. As shown in the U.S. Logistics Pressure Matrix, warehouse rates remain elevated.

Chart of the Week - OPEC’s Not Buying It 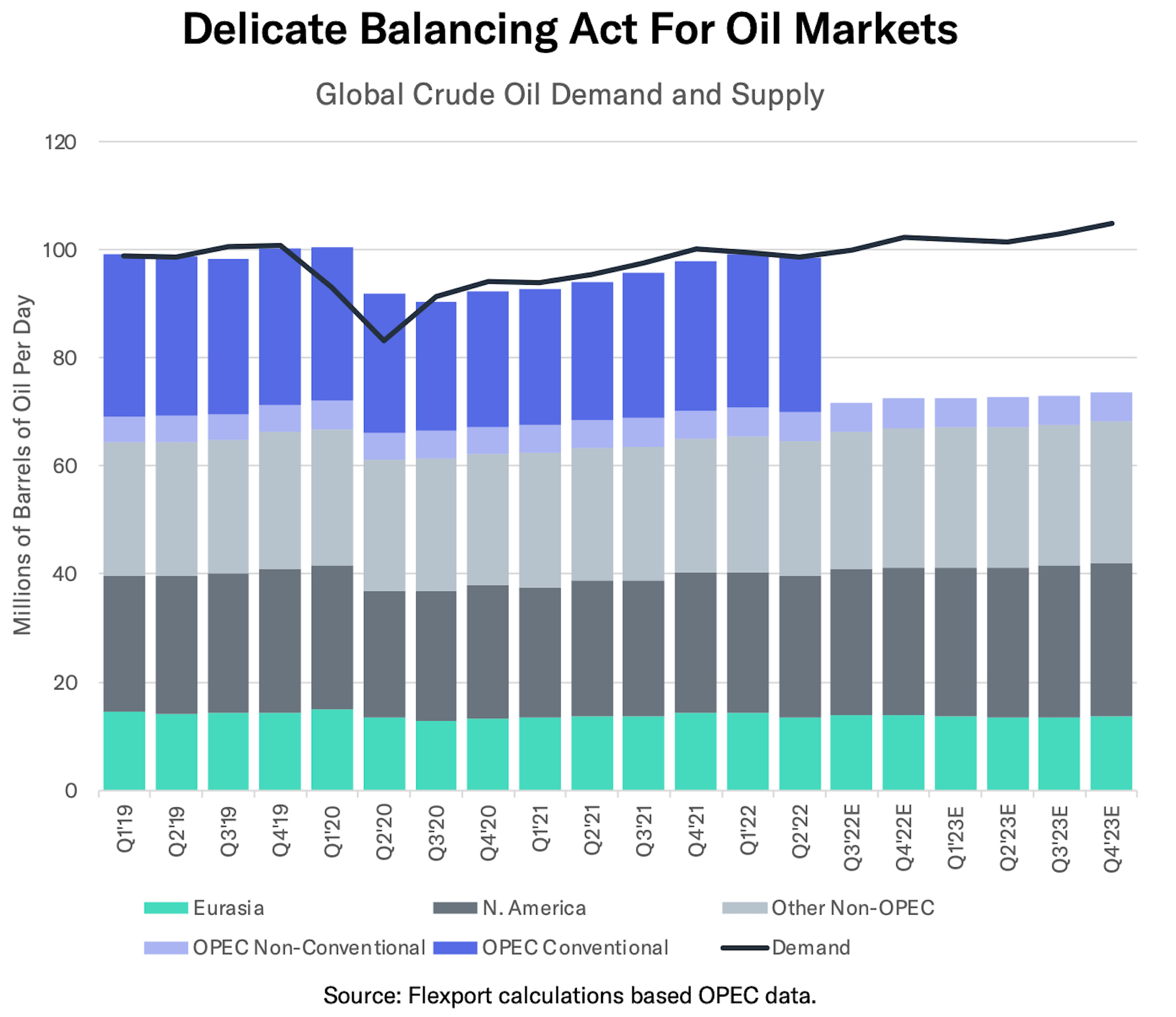 There’s been a marked divergence in energy markets recently, with natural gas prices soaring and oil prices dropping over 20% since their early-June peak. Given the price of oil feeds into consumer prices and logistics costs (fuel) as well as into plastics and chemicals expenses (as a feedstock), it’s worth asking: what’s been going on with oil?

Saudi Arabia’s Energy Minister, Prince Abdulaziz bin Salman, has stated that the recent drop prices reflects the market being distorted by “unsubstantiated stories about demand destruction, recurring news about the return of large volumes of supply, and ambiguity and uncertainty about the potential impacts of price caps, embargoes, and sanctions.”

OPEC’s latest forecast, shown by line in the chart above, calls for demand to grow steadily at an average 2.6% year over year rate in Q3’22 through Q4’23. In millions of barrels of oil per day, to an additional 5.5mb/d of demand in Q4’23 versus Q1’22. OPEC forecasts exports from Eurasia, led by Russia, will only fall by 0.8mb/d despite sanctions. Shipments from North America are expected to increase by 2.5mb/d.

If the market is to remain in balance, OPEC supplies may need to increase to 31.3mb/d by Q4’23 from 28.6mb/d currently - OPEC itself does not provide a forecast for its own output. Prince bin Salman has indicated that OPEC is working on a new output plan. Its contents will be a must-read for any firm whose supply chain is touched by oil prices.