The latest installment of perhaps the world’s premier economic forecast told a tale of slowing growth in GDP and trade volumes plus rising prices. And both its risk analysis and its forecasting track record suggest things may be even worse than the grim forecast suggests. 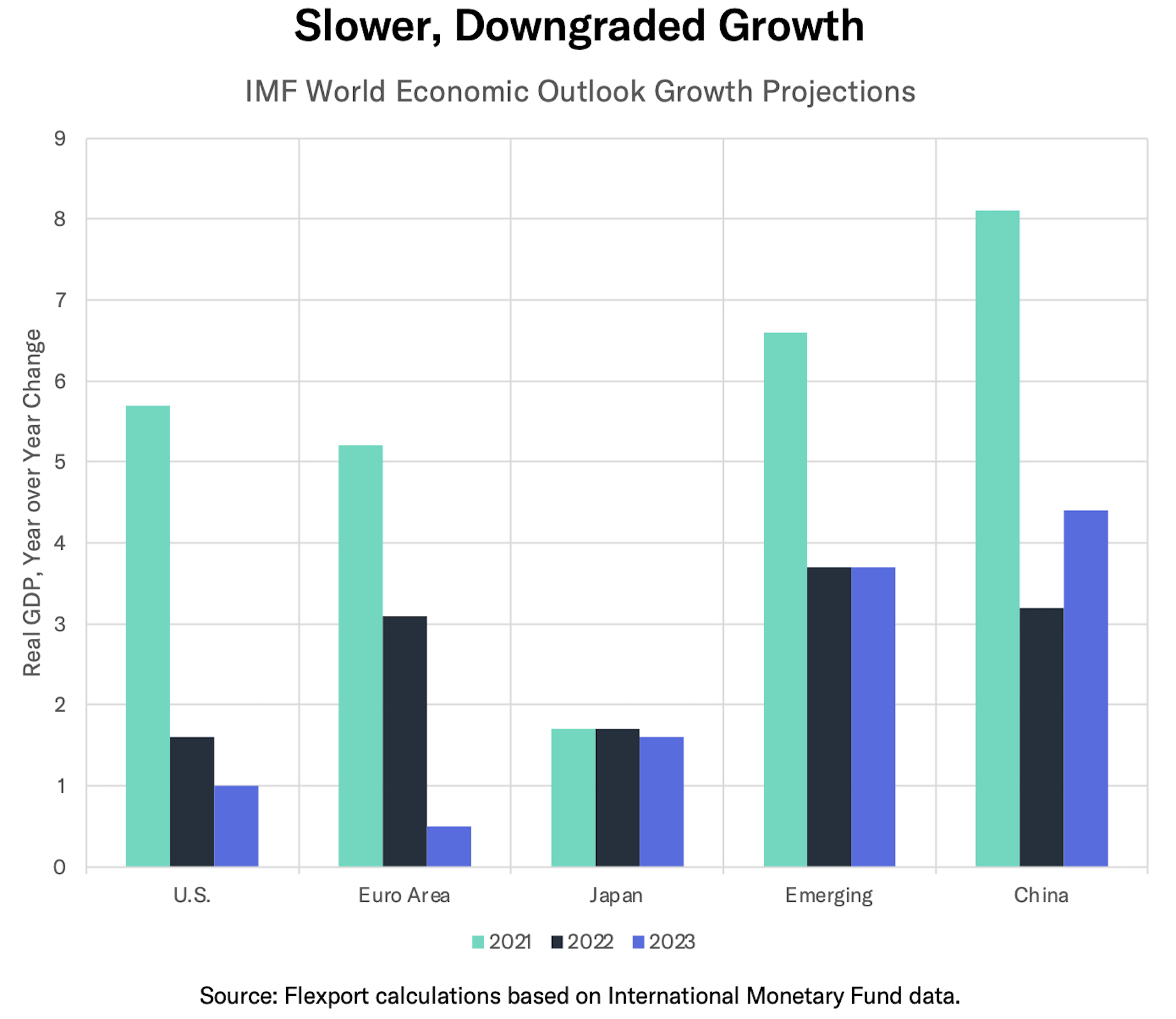 If you’re a professional economist and are asked how things look for the world economy in the next year or two, it does not suffice just to shake your head grimly and make an unhappy noise. You’re supposed to quantify.

The International Monetary Fund just did both. This past week, in its latest quarterly World Economic Outlook, it predicted that global growth in 2023 would be the weakest since 2001 (excepting the global financial and COVID crises). It forecast that world output growth would slow from 3.2% in 2022 to 2.7% in 2023. Relative to the IMF’s April expectations, that marked a downgrade for 143 economies accounting for 92% of world GDP.

The chart above shows the downward trend from last year to next in the IMF forecast, with both the US and the Euro Area seeing slowing growth. While the annual forecast number remains positive, that still allows for consecutive quarters of negative growth – something the IMF foresees for 31 of the 72 economies for which it does quarterly forecasts during 2022-2023. For the Euro Area’s largest economy, Germany, the IMF is forecasting -0.3% growth across the whole of 2023.

While China’s growth looks better than that of major Western economies, the 3.2% growth forecast for 2022 would be the slowest in more than four decades (excluding the Covid shock in 2020). The Emerging economies forecast in the chart includes China. India’s growth in 2022 (6.8%) and 2023 (6.1%) is expected to be stronger, while Russia’s economy is expected to shrink in both years (-3.4% and -2.3%).

One of the most striking features of the report is the extent to which the IMF has had to revise past projections. For GDP growth, those revisions have generally been large and negative, both compared to the July and April versions of its Outlook. Relative to April, world GDP growth was revised down by 0.4% in 2022 and 0.9% in 2023. Those are massive revisions for such a short time period.

The revisions have gone in the other direction on prices. The IMF acknowledges that it has consistently underestimated the persistence of inflation. It now forecasts that global consumer price inflation will go from 4.7% in 2021, to 8.8% in 2022, to 6.5% in 2023, and then 4.1% in 2024. It predicts the global inflation peak in the third quarter of 2022.

As if these forecast downgrades were not enough, the report notes that risks are distinctly to the downside. Among the key ones that it identifies are errors in monetary policy, persistent inflation, debt crises in emerging economies, concerns about the Chinese real estate sector, and further health crises.

So the quantitative story is one of dramatically slowing output and trade growth and rising prices. The grim head-shake and unhappy noises are self-explanatory.

Recent Flexport research includes updates to our key indicators, as well as an investigation of why ocean shipping times to Europe and North America have diverged.

The latest update to our Post-Covid Indicator shows overall preferences for goods over services are expected to decline to below summer 2020 levels into late Q4’22.

Our Trade Activity Forecast calls for imports to increase sequentially on a real (i.e. inflation adjusted), balance of payments, seasonally adjusted basis by 1.2% in September after dipping in August.

U.S. Consumer Price Inflation (CPI) was 8.2% in September on an annual headline basis. That was the same level as August and was higher than economists expected. Perhaps more important, core CPI – excluding food and energy – rose by 6.6%. That was up from 6.3% a month earlier and set a 40-year high. Shelter costs increased to 6.6% from 6.3%. As discussed in prior research, shelter’s an important signal of the stickiness of inflation.

U.S. retail sales were unchanged in nominal terms in September vs. August. Among durable goods, sales of autos fell by 0.4%, while sales by furniture and electrical goods stores declined by 0.7% and 0.8% respectively. For nondurables, sales of gasoline fell by food and clothing improved.

U.K. merchandise trade activity increased 42% year over year in August, including a 37% rise in imports and a 49% surge in exports. The figures are flattered by inflation. Imports on a real basis were still 15% higher than a year earlier and 10% above the same period of 2019.

The U.S. Trade Representative has published a call for comments on the Section 301 duties applied to imports from China. That’s part of a broader review. The comment period runs to January 17, 2023, suggesting a final action on the tariffs is still several months away.

The New Zealand government has launched a dispute against Canadian dairy tariff-rate quotas under CPTPP trade agreement rules. The move is notable in being the first launched under that deal’s regulations. It also comes against the backdrop of a similar move by the U.S. against Canada under USMCA rules.

The German government has also introduced major new natural gas subsidies worth around 96 billion euros. That will be delivered in the form of a one-off payment to cover consumers’ December energy bill. A wider plan across the EU to cap natural gas prices for use in power generation is making slow progress.

Global PC shipments fell by 15% year over year in Q3’22 according to data from IDC. Among the major manufacturers only Apple, which produces its own processors, managed to expand with 40% growth. That’s already led two major chipmakers to cut costs by slashing headcount and reducing capital expenditures.

Supply chains continue to be beset by strikes. A new strike at the Port of Liverpool started last and comes amidst discussions of redundancies by the port operator.

Aluminum prices climbed 7% after reports of a U.S. plan to apply punitive tariffs to all aluminum exports from Russia. That follows a new round of sanctions launched two weeks ago, as well as plans by the London Metal Exchange last week to ban trade of Russian metals from its systems.

U.S. logistics payrolls dipped by 0.1% sequentially in September versus August, including air, rail, water, trucking, couriers, warehousing and support. That was the first decline since April 2020 and included a lower number of trucking and courier jobs. 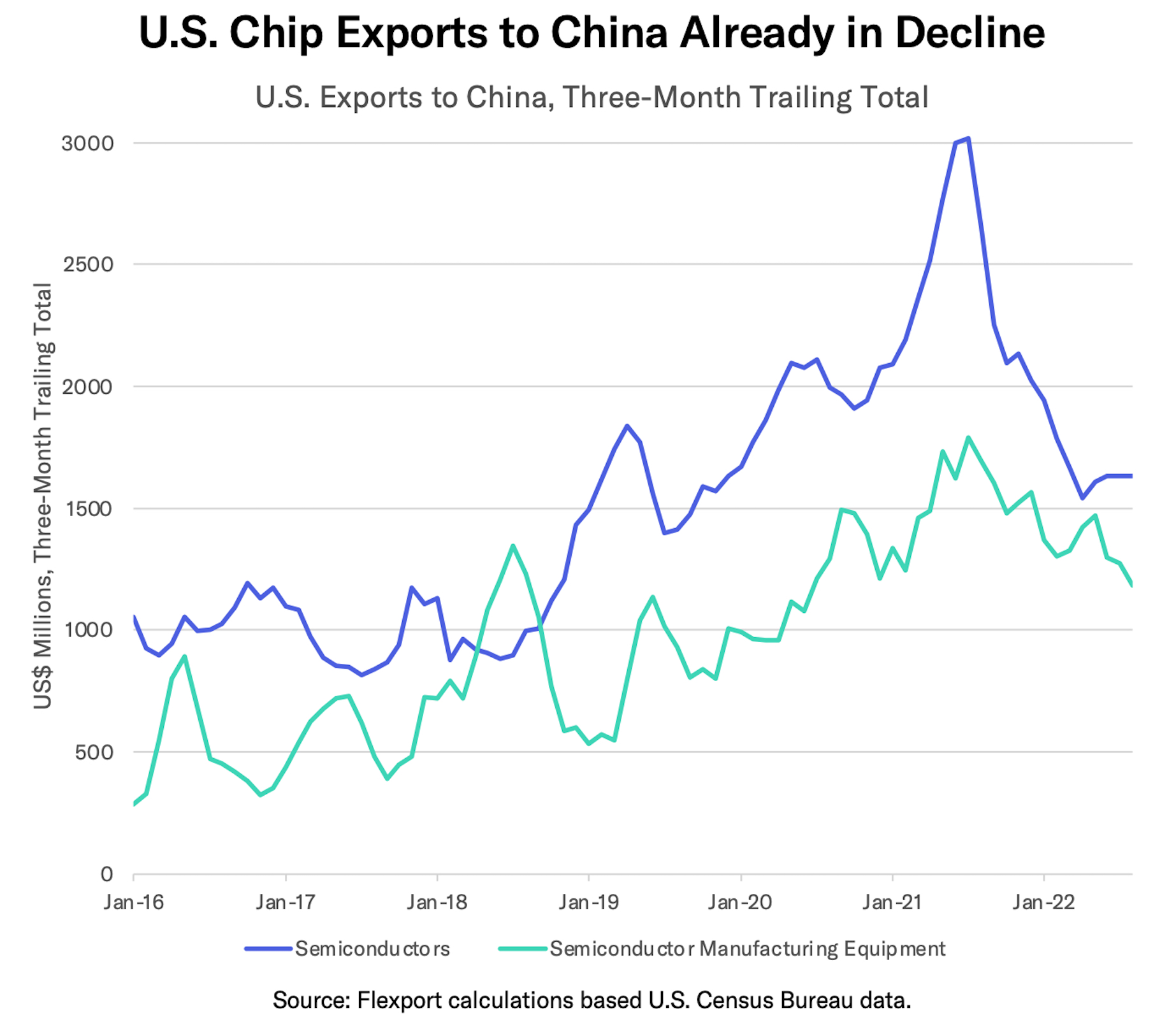 The U.S. government has launched new restrictions on the export of semiconductors to China. The rules cover AI and supercomputing devices that may have military dual uses. They also include exports of equipment that can be used to manufacture those devices too.

The interconnected nature of semiconductor supply chains means that companies outside the U.S., including South Korea and Taiwan, also effectively face the restrictions. That’s already led a wide range of semiconductor and chip-making equipment companies to detail plans to restrict or end their operations in China. At least three firms have gained exemptions, but only for 12 months.

China accounted for 28% of U.S. exports of semiconductors (HS 8542) in the 12 months to August 30, 2022. There are already signs of a downturn in shipments. The chart above shows shipments fell by 39% year over year in the three months to August 31. Similarly, China represented 23% of U.S. exports of semiconductor manufacturing equipment (HS 8486) in the past 12 months, while shipments fell by 30% in the past three months.

It’s worth noting, however, that shipments of both chips and machinery to China from the U.S. remain well above the levels of 2017, before the Trump administration’s trade war with China began.