Why Airline Baggage Fees Are Too Low

Get Started
That's taken care of.

The cargo hold of commercial airplanes doesn’t just carry checked baggage. It’s also transporting commercial airfreight. The latest iPhone or seafood fresh from the Tsukiji Fish Market could be right beneath your feet.

Everyone hates baggage fees, but you’re probably getting a good deal. In most cases, airlines take a loss by carrying your baggage because they could be transporting airfreight instead. It’s opportunity cost: Every additional piece of luggage you take means less room for more valuable freight. Much of what’s transported by air is expensive or time-sensitive; airfreight represents 35% of global trade by value, even though it’s only 1% by volume.

You’re almost always getting the better end of the deal when you pay $25 for baggage on a domestic flight. When it comes to international flights, your free checked bag is an absolute steal. We’ll take you through their economics in this post.

Why airlines are giving you a good deal

On U.S. domestic flights, airlines typically charge $25 to check the first bag and $35 for the second. They cap the weight of these bags at 50 pounds.

For the sake of simplicity, let’s assume that every passenger checks baggage that weighs 50 pounds. How does that compare to 50 pounds of commercial cargo?

A lot depends on the trade route. It costs more to ship a package from New York to Alaska than from New York to California. But as the chart below shows, baggage fees are low compared to express cargo prices for nearly every flight. (Express cargo is similar to first class mail: If a plane can’t take all cargo, express cargo has the highest priority after passenger bags.) 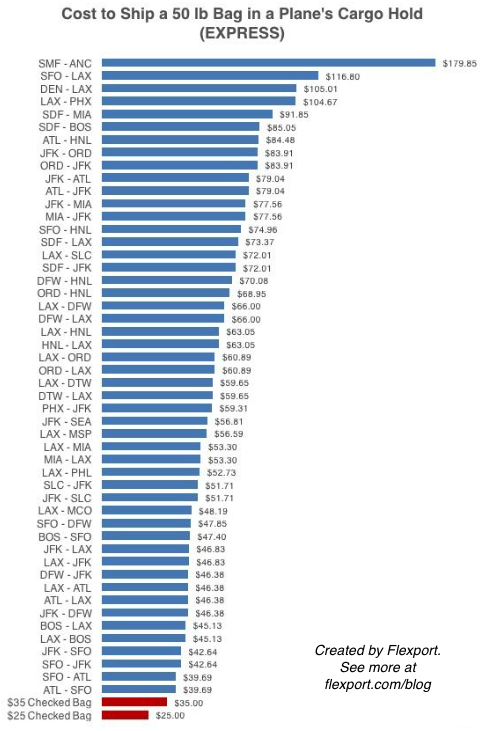 Here’s the takeaway: when airlines check your suitcase for $25, they’re giving up space for which freight forwarders would pay $40 to $100 to transport air cargo. Airlines are missing out on some major revenue by taking your big suitcases.

The data above comes from WorldACD, a provider on air cargo data, for the 50 routes responsible for most cargo shipments. They overlap significantly with the busiest passenger routes. Shipping rates differ depending on direction, so we averaged the cost of each leg. The most expensive route for cargo from this group is Sacramento-Anchorage and the least expensive is San Francisco-Atlanta.

Here are a few more disclaimers about the data. These rates are annual averages; they fluctuate throughout the year, peaking by the busy holiday season. It doesn’t differentiate between airlines. Finally, it also includes data from both passenger and cargo-only airlines.

That was the analysis for express cargo. Now let’s look at regular cargo. If a plane runs out of space because passengers took too many bags, regular cargo gets left behind. 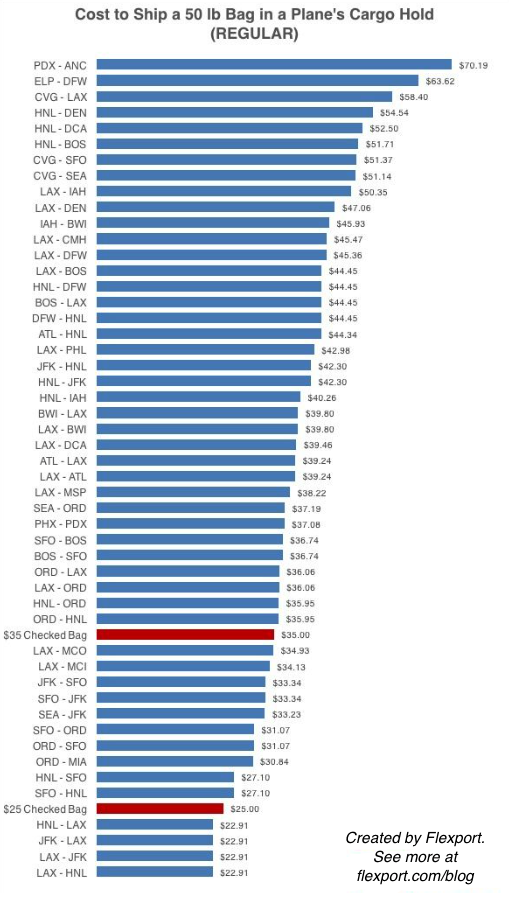 Baggage fees are low even after this tougher comparison. On the majority of routes, airlines charge less for a suitcase ($25 or $35) than for freight of the same size ($23 to $70).

One more chart. What if your suitcase doesn’t weigh exactly 50 pounds? What if you’re checking a 30 pounds suitcase? In that case, you’re getting a worse deal. 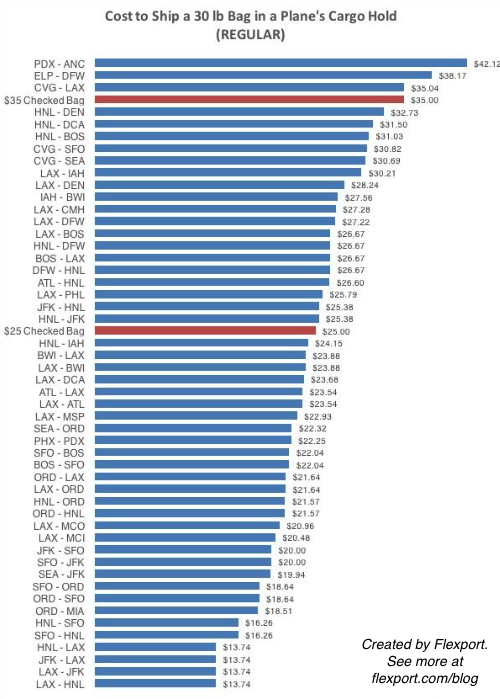 In this comparison, more than half of the passengers are overpaying on a $25 fee, and almost everyone overpays on their second suitcase of $35. Airlines are able to make money off of passengers who don’t use all the weight they’re allotted.

The economics of baggage fees are all messed up

We should note of course that airlines aren’t doing you a complete favor—the “free” baggage space shows up as higher ticket prices. Still, if you’re bringing baggage, you’re subsidizing the travelers who do.

We’ve already discussed domestic flights. What about international flights, where passengers are typically allowed at least one free checked bag? There you’re getting an even better deal. By overpacking and bringing a second luggage item, you’re displacing wine from France, iPhones from China, and tuna from Japan.

Comprehensive data for various air trade routes is hard to come by, but here’s one example. Shanghai to New York is one of the world’s busiest trade routes. The cargo hold is packed, and if you check a 50 pound bag, it means that the airline won’t be able to charge $150 for a 50 pound package. That’s a big opportunity cost for an industry that has a hard time making any profit.

Let’s get back to domestic flights, which are typically less space-constrained. The average domestic flight fills only 37% of its cargo hold. Why is that?

Let’s think more about the incentives created by these baggage fees. By charging for baggage on domestic flights, airlines are taking away from the comfort of the passenger’s experience. It incentivizes passengers not to check their bag in the abundant space of the cargo hold, and instead fight for space in cramped overhead bins. This inefficiency may even be hurting the bottom line of airlines. They’ve begun to order new planes with larger overhead compartments to accommodate extra carry-ons, even though there’s such abundant space beneath. When flights fill up, airlines are forced to check carry-on bags, leading to delayed flights.

Airlines are giving away valuable space on international flights and then charging for abundant space on domestic flights. When airlines charge for domestic flights, they’re making it less convenient and comfortable to fly. It makes you wonder: Why have airlines structured practices to deliver such inefficient outcomes?

Read this next >> Why Are There Always Holiday Shipping Delays?