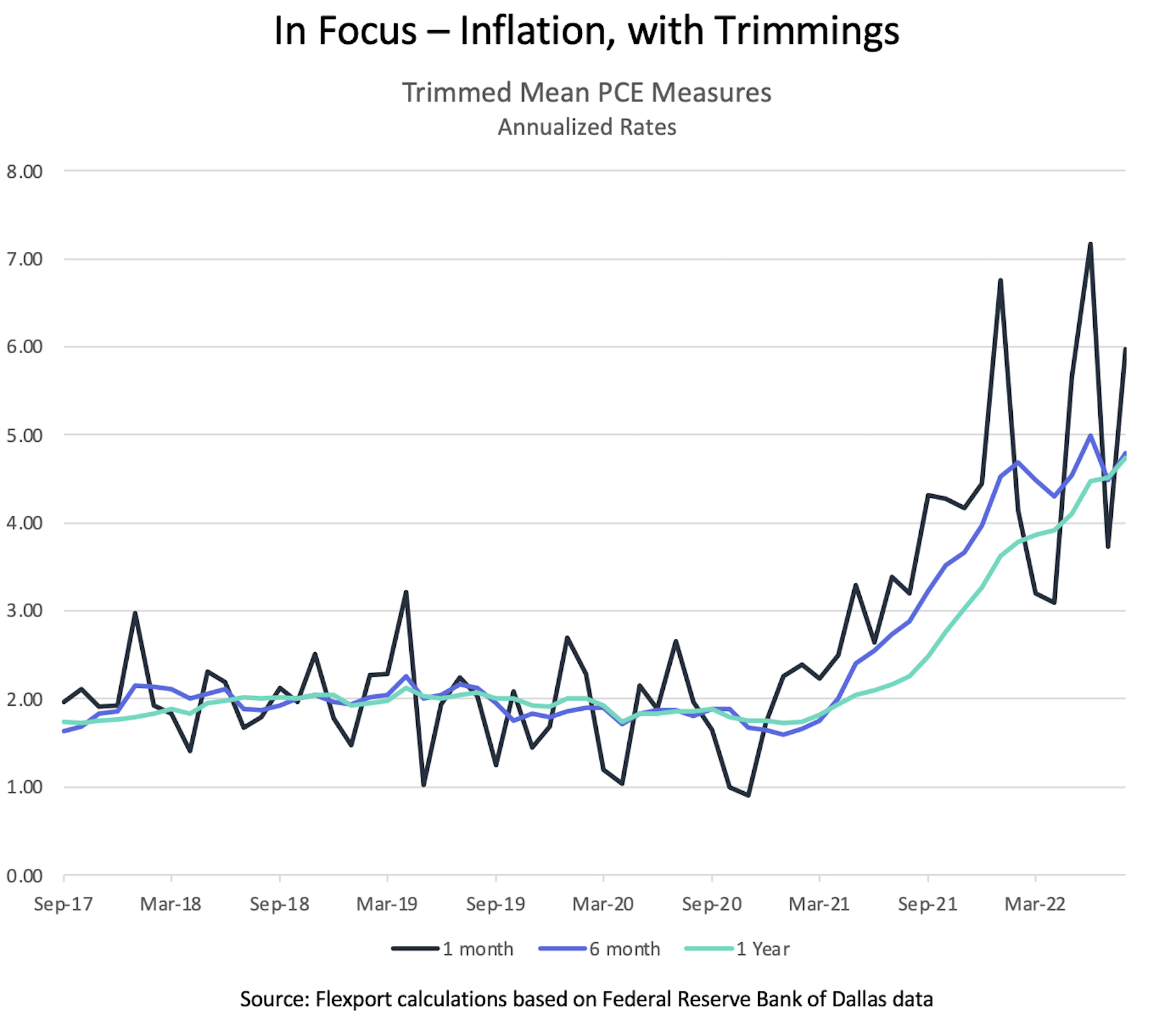 If you’re looking for the glitzy, popular, name-brand inflation measure, you want the Consumer Price Index (CPI). It gets its own release, it’s known far and wide, and it’s the kind of thing you might use for indexing a wage contract. It even moves in eye-catching ways. It fell to near zero in the wake of the pandemic recession, then soared to near 9%, then dropped back over the last two months. All very exciting.

If, instead, you’re looking for a work-horse inflation measure, known to only a few, favored by the cognoscenti, derived from Table 9 buried in a separate report on Personal Income and Outlays, you want the Trimmed Mean PCE Inflation rate (TM-PCE).

It doesn’t dip and soar and recede. In fact, if you look at the black line in the chart, it didn’t seem to do much of anything at all until the middle of 2021. It was just hanging out right around 2%, with a small sag after the pandemic started. Not coincidentally, 2% happens to be the inflation level targeted by the US Federal Reserve, and the TM-PCE rate is the Fed’s preferred measure.

As we’ve discussed before, it’s challenging to measure inflation when there are wild swings in components. Over 2022, monthly changes in CPI energy prices have swung between +11% in March and -5% in August. There are some ways around this; it’s common to look at “Core CPI” which excludes food and energy, for example. But TM-PCE trims off the volatile components and has been even smoother. The virtue of this for the Fed is that it won’t find itself overreacting to short-term movements that then may correct themselves. This is particularly important because monetary policy is a longer-term measure that can take years to have its full effect.

Even with TM-PCE, there is a choice between looking at how the index moved over one month, half a year, or a full year. All three are depicted in the chart, with the shorter-term measures presented as annual rates.

Why would one even care about the shorter-term noisy measures? There’s always a danger with annual measures that they could be driven by big monthly moves 10 or 11 months ago and not reflecting recent developments. But that’s not at all what we see in the chart. The one-month figure just released for August 2022 was 6.0%, the second-highest figure over the five years shown, just behind 7.2% in June.

In fact, there’s nothing in this TM-PCE data to suggest that the battle on inflation is won, nor even that it has stabilized. The one-year measure has risen every single month since January 2021.

The big driver of exchange rates and macroeconomic performance in the United States right now is monetary policy. The policymakers driving monetary policy are looking at a one-year measure of inflation that just hit 4.7% and continues moving further and further from their 2% target. Expect them to keep pushing back.

Real Personal Consumption Expenditures increased by 0.1% from July to August, as services consumption rose by 0.2% and goods consumption fell by 0.2%. Real Disposable Personal Income was revised up for July and rose by 0.1% in August.

US mortgage rates continued their climb, with the average rate on a 30-year fixed mortgage hitting 6.7%, up from 3.0% one year ago. Mortgage rates are one of the key mechanisms by which tighter monetary policy is meant to discourage spending and slow the economy.

Inflation in the Euro Area rose to a 10.0% annual rate in September, according to a flash estimate, up from 9.1% in August. By far the largest contributor was energy prices, which rose at a 40.8% annual rate.

Euro Area unemployment was stable from July to August at 6.6%. The figure is down significantly from 7.5% in August 2021. There is substantial variation across the Euro Area, with unemployment in Germany at 3.0%, France at 7.3%, and Spain at 12.4%.

The Bank of England launched a policy of buying up to £5 billion a day in bonds. The expansionary policy runs counter to previous monetary tightening, but was adopted to protect UK pension funds from a sudden fall in bond prices (rise in interest rates) following the new Chancellor’s budget announcement.

In an unusual move, the Department of Homeland Security provided a limited waiver to the Jones Act to allow fuel to be delivered to Puerto Rico on a non-US flagged ship. The move was intended to facilitate relief in the wake of Hurricane Fiona.

The US House and Senate both voted to suspend temporarily the tariffs on a key ingredient for producing baby formula. While Article 1, Section 8 of the Constitution gives Congress the power to regulate international commerce and impose duties, the Executive branch has been far more active in this arena in recent years.